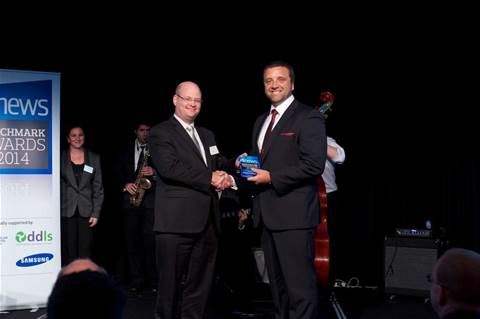 Deakin University CIO William Confalonieri has been named the inaugural iTnews Education CIO of the Year in recognition of his pioneering work streamlining online student services.

Confalonieri was presented the award at last night's Benchmark Awards gala dinner held at Melbourne's Grand Hyattt and attended by 250 IT professionals.

The DeakinSync platform Confalonieri and his team have created integrates a dizzying array of online functions into a personalised online student portal, including assessment results, learning resources and automatically synchronised calendars, alerts email and course timetabling.

The hosted solution can be accessed by students from any of their devices, and goes a long way towards satisfying the technological demands of the digital natives that dominate Deakin's end-user base.

The CIO has overseen a massive integration task that brings together cloud and legacy systems, and has met all milestones on time and budget, according to university executives.

Confalonieri has been described by his staff as a thoughtful and ambitious leader who creates a culture of excitement and enthusiasm amongst his team.

"Let me tell you, it feels good," Confalonieri said upon accepting the award.

He said it was an honour to be nominated against Monash University's Ian Tebbett and Bret Watson of the Harry Perkins Institute of Medical Research, and said he wouldn't be accepting the award without the efforts of a harworking team.