DDoS on DNS provider Dyn takes out much of the internet 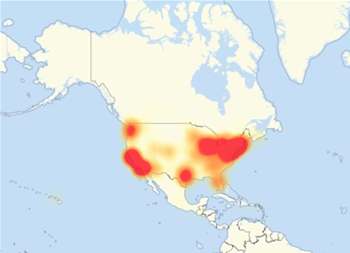 Outage map from US backbone provider L3 showing the extent of the DDoS attack in the country.

A distributed denial of service attack against domain name services provider Dyn has succeeded in shuttering many of the internet's largest sites.

The attack started around 9pm Australian eastern standard time and impacted customers in the US east region, Dyn said in a status notice.

Dyn said the attack abated some three hours later, but started anew on Saturday morning, with sites failing to resolve in the DNS for users on the US West Coast and Europe.

The motive for the attack and those behind it are unclear. Dyn has not provided technical details on the attack, such as the volume of traffic and how it was generated.

Security firm Flashpoint said its research indicated some of the infrastructure responsible for the attack were botnets compromised by Mirai malware.

Mirai botnets were also responsible for the recent attack on security journalist Brian Krebs' Krebs on Security site. However Flashpoint said the botnets used in today's attack were separate and distinct from those used in the Krebs DDoS.

Mirai turns large numbers of internet of things devices into a botnet to conduct DSoS attacks.

Many of the internet's most popular sites such as Twitter, New York Times, BBC, The Guardian, AirBnB, Spotify, Paypal, and Reddit use Dyn's managed DNS services, and became unreachable for users during the attack.

LA Times reported that the US Department of Homeland Security is investigating the DDoS attack.