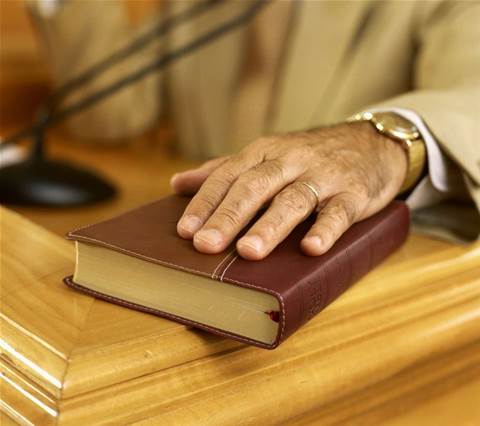 Allegedly unaware of it before late last year.

ISP iiNet chief Michael Malone has been accused of submitting "utterly misleading" affidavits and lying under oath over his knowledge of an alleged automated system at Westnet for dealing with copyright infringement notices.

The CEO of Australia's third largest ISP, Malone today faced cross-examination in the Federal Court in Sydney as part of a landmark trial in which several of the largest players in the film industry are attempting to prove that an ISP can and should control the activity of users on its network.

Malone faced an intense cross-examination from the film industry's senior counsel Tony Bannon, who repeatedly grilled Malone - a number of times raising his voice - over the policy at Westnet, an ISP iiNet acquired in 2008.

Malone agreed under oath that he "hit the roof" when he was at first "casually" informed at an out-of-work function of Westnet's policy for passing on infringement notices.

But he stated that he was unaware of the policy prior to the function and a subsequent email exchange.

Nor was he aware that Westnet hadn't followed a directive from him to adopt the iiNet Group's policies over its own after the acquisition.

iiNet acquired fellow Perth ISP Westnet for $81 million on 8 May 2008. Malone became a director of Westnet between 19 May and 30 October the same year.

He stated during the acquisition and integration of the business with iiNet that he was "forever tripping over policy" differences between the two companies.

"When I saw a policy [that was different to iiNet's] I said [to Westnet that] ‘You need to operate on this [iiNet] policy from this day forward," Malone said.

"[In this case] I saw a policy in place that was not in line with iiNet policy and I asked for it to be changed," Malone said.

"You didn't think for a moment that the policy had just been implemented in October did you?" Bannon pressed.

"I had no idea," Malone responded. "I could not tell you today when it was implemented or why.

"I didn't know and didn't make a further enquiry on it."

"But you understood the Westnet policy just described had been in operation prior to the acquisition [of Westnet] by iiNet?" Bannon quizzed.

"I assume so," Malone stated.

"Correct. I only know it was in place at October," Malone stated.

"But you understood [it had been in place longer]?" Bannon repeated.

"That's not a truthful answer you've just given to this court is it?"

"It's as truthful as I can give," Malone stated.

Counsel for the film industry also grilled Malone over his alleged failure to make reference to the Westnet policy in any of his affidavits.

"Nowhere in that affidavit [being examined in court] do you mention the fact that a company in the iiNet Group did in fact have a policy for a period of time and implemented it of forwarding copyright infringement notices to customers?" Bannon alleged.

"In fact, that information is not mentioned anywhere in your affidavits is it?" Bannon alleged.

"So you presented utterly misleading documents to the court?" Bannon alleged.

"It wasn't relevant that one of the [iiNet] Group's companies was sending the notices [on to customers]," the film industry's counsel pressed.

"They're not the same notices," Malone said.

He alleged that Westnet had never received notices from the Australian Federation Against Copyright Theft.