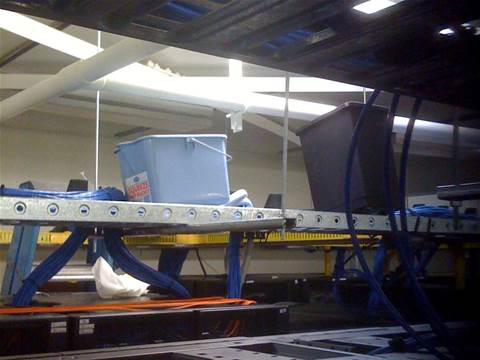 Datacom suffered a major outage in its Melbourne co-location facility after heavy rain broke a ceiling panel and poured into customers' equipment on Saturday afternoon.

The data centre operator's managing director Michael Browne denied there was an outage.

"There's no weight in that," he told iTnews. "The centre was not down and not ever flooded."

But his version is at odds with his own network operations centre (NOC), a series of photos sighted by iTnews and first-hand accounts from furious customers, who said the dead equipment included storage area networks, servers and routers.

"People had racks full of equipment that was dead. Some techs in there were close to tears," a national voice and data carrier who spoke on condition of anonymity said.

"We only had two servers and a router die. Others came off far worse. In some neighbouring racks, people were pouring water out of power supplies and SAN equipment."

Another customer confirmed they had been off-the-air for 13 hours and was aware of yet another customer - a business associate - with water-damaged kit.

Photos emerged showing a large hole and water-damaged ceiling above a caged area and buckets sitting on top of overhead cable trays, with customer racks clearly visible beneath.

Customers who did not suffer water damage lost power and cross-connects for up to 12 hours.

They were also unable to gain access to their racks until at least Sunday morning.

At least one customer was collecting information from others affected with a view to launching a class action against Datacom.

A number of major carriers and wholesalers were understood to have kit in Datacom that was affected by the outage.

An Optus spokesman confirmed to iTnews the telco rented space in Datacom and was affected by the power outage.

Wholesaler Vocus - which has a point-of-presence there - was able to work around the issue, chief executive James Spenceley said.

And AAPT - which had "a minor amount of traffic out of Datacom" - "didn't experience any notable impact to services for our customers as a result of the weather in Melbourne", a spokesman said.

They had only seen "unofficial reports" of the damage to Datacom.

iTnews has obtained the string of SMS outage messages sent to affected customers as the flood drama unfolded.

The first was sent on Saturday at 3.52PM titled: "Sbj: Flooding on the data floor."

At 5.28PM, network operations centre (NOC) staff told customers: "Datacom GC site has been affected by major storms. Some systems are currently shutdown until further notice, the remainder is stable."

At 6.40PM, "customers with single power supplies on DB7 (open data floor)" were advised they were affected by the flood. The "facility [was] otherwise stable", the update again said.

At 7.47PM, an update said the fault had been isolated and estimated power would resume "by midnight".

Both messages advised customers: "Do not come to site until further notice."

By 2.14AM Sunday, the situation had worsened. The site was "still experiencing issues" and the floor remained closed.

A "staged power-up" started at 3.49AM. A half-hour later, customers were told power had been restored to "99 percent of affected circuits". They were also invited to "please check your devices".

An official post-incident report did not appear to have been released. Information flows were complicated by a public holiday in Melbourne today.

At least one customer said they had been advised by NOC staff of a power surge in the facility's power distribution system.

Customers attached to newer power distribution units (PDUs) were saved by overload switches. Others were understood to have not been as lucky.

Lawsuit in the wings

Customers, including web hosts and ISPs, last night received an anonymous email seeking information from those affected for the purpose of commencing a class action.

The organiser told iTnews that parties interested in joining the suit should email datacom (dot) lawsuit (at) gmail (dot) com.

A further formal statement was requested from Datacom.

Were you impacted by the Datacom outage? Did you lose equipment? Email rcrozier (at) itnews (dot) com (au) and tell us your experience.