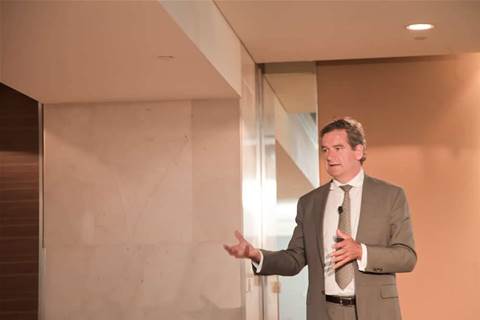 Financial industry giants are looking to leverage their big data stores as they face new competition from new digital players like Google and Facebook.

“People are having experiences with these companies and expect their banks to provide rich and dynamic content at a lower price point than they do," he said.

Data, Harte said, was the “new oil of the digital world”, with IT playing a key, strategic role in decisions around interest rates, profitability, staffing and workflow.

He made reference to new technology in production at the Commonwealth Bank that would allow the bank to analyse its big data sets to tailor products like home loans and personal loans to customers based on their history.

The session was attended by IT executives from the Westpac Group, Suncorp and Perpetual, and sponsored by Intel and HP.

“The job of the IT group is not just sitting in the back office and making sure that everything runs with reliability, but in fact, positions the organisation for competitive advantage,” Harte said.

“If we continue to try and compute in the way our customers require, on the infrastructure that we have in-house, we won’t be able to afford to compete."

In Australia, financial institutions are required to notify the Australian Prudential Regulation Authority (APRA) when adopting cloud or outsourcing services.

APRA’s head of risk, David Pegrem, urged conference attendees to “think strategically” about the cloud, considering not only costs but also availability and resilience.

“Any solution you choose, whether internal, outsourced or offshored, should result in higher availability and a greater level of resilience than you now have,” he said.

To inform decisions about the cloud, APRA has drafted a data management guide that Pegrem said was based on the agency's February 2010 guide to IT security risk management.

The guide would be released to industry later this year.

One conference attendee questioned if Australian financial institutions faced a fair playing ground, with APRA regulating only “one or two special payment providers” including Paypal.

Harte noted that regulatory oversight was not necessarily a bad thing, highlighting risky international financial products like collateralised debt obligations (CDOs) in the US.

“I think it’s fair to say that Australia is the best country in the world to do banking,” he said.