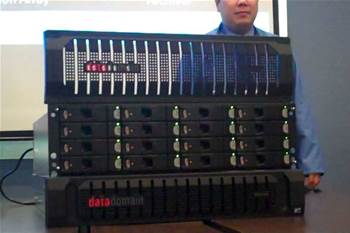 EMC has credited its US$2.4 billion acquisition of deduplication company Data Domain for its new disk-based backup and archive system, the Data Domain Archiver.

Touted as the industry's first long term retention system for backup and archive, the Data Domain Archiver was announced as an attack on "the last bastion of tape".

"We want to get our customers off of tape and get them to de-duplicated disk."

Jenkins expected a disk-based archiver to be faster, easier to manage, more efficient, and more secure than tape.

Tape needed to be physically transported to organisations' long-term warehouses, and data may be lost or stolen in transit, he explained.

The Data Domain Archiver provided up to 570TB in usable capacity, with a maximum throughput of 9.8TB per hour, and would connect to an organisation's data centre by WAN.

It moved, stored and deduplicated backup and archival data based on an organisation's policies, storing short- and long-term data in two separate tiers.

Alp said it had been a "significant research effort" for EMC to produce an integrated management tool for those products with a single GUI, so supporting other vendors' products was not a priority.

He expected the Data Domain Archiver to be "cost-justifiable" when compared with tape archives, noting that the disk-based system did away with costs of media, logistics and staffing.

"Look out," he said to tape vendors in an interview with iTnews. "Oracle and other vendors will have to quietly transform their products.

"Although they have a large install base of tape, less and less customers will be getting new tape products. We expect to see [tape revenue] drop even faster," he said.

EMC beat NetApp in a bidding war for Data Domain in 2009, spending a total of US$17 billion on research and development and acquisitions during the past five years.

According to Alp, the Archiver had been on the Data Domain's roadmap since before the acquisition, and was "a long time in the making".

While he was unable to discuss the company's financials ahead of next week's release of Q4 2010 details, Teuber expected to spend 11 to 12 percent of revenues on R&D in 2011.

In 2010, the company spent US$2 billion on R&D and US$3 billion on acquisitions, including US$2.25 billion for 'Big Data' storage company Isilon in November.