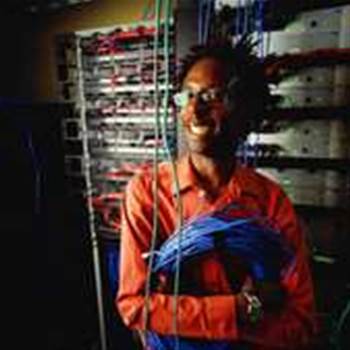 Power consumption will be a central theme as some of the world's biggest companies gear up for the forthcoming Data Centres Europe event in London this March.

With data centre space in the UK capital set to increase by around 45 per cent by 2012, the threat that London will run out of space and power is very real, according to consultancy BroadGroup.

As some of the biggest power suckers on the planet, data centres are trying hard to reduce the consumption required for both economical and environmental reasons.
"Data centres are clearly energy intensive and their evolution should consider not only the growing IT-driven demand but the need to minimise carbon footprint, " said Andrew Harrison, director at global consultancy ARUP.

"Managers need to challenge any acceptance that opportunities to improve sustainable performance are limited or simply do not exist."

One of the major power draws in a data centre or any other larger server environment is that of cooling. It is currently estimated that for every watt of power required to run a server another watt is required to cool the system.

Cooling and environmental controls are now being scrutinised as closely as server and chip design.

HP recently showed a group of journalists the progress is it making in what it calls 'Dynamic Smart Cooling' whereby conditions inside a data centre are modelled and monitored to enable cooling systems to adapt in real time to temperature changes.

As performance per watt has increasingly become a benchmark in buying criteria for companies building and upgrading servers and data centres, the panel at Data Centres Europe will discuss whether the industry has reacted quickly enough to provide measurable benchmarks such as power ratings on servers.

Other issues such a cooling at chip level, distribution of air conditioning systems and measurement of airflows and the onset of virtualisation will also addressed throughout the event.

Got a news tip for our journalists? Share it with us anonymously here.
Copyright ©v3.co.uk
Tags:
acentresdatafuturegreenerlooknetworkingto