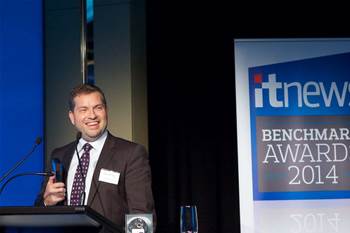 Damon Rees has been named Retail CIO of the Year at the iTnews Benchmark Awards, recognised for his work on transforming the computing experience of tens of thousands of Woolworths staff.

Rees, handed the Acting CIO role at Woolworths in between the departure of former CIO Dan Beacham and the imminent arrival of new CIO Clive Whincup, arguably moved the innovation dial further in his short time in the interim role than most CIOs do in far longer stints.

Rees' submission was supported by the commendation of several Woolworths staff, who told iTnews of Rees' integral role in the retailer’s massive collaboration effort, Project LEAP.

Project LEAP re-imagines the desktop experience, moving office-based staff off a traditional SOE (standard operating environment) onto a mobile device that consumes virtualised and hosted applications. The initial phase of the project rolled out Google Apps to some 25,000 staff.

Rees has set in place a foundation for Woolworths to spend more of its IT budget on new capabilities rather than adhering to the cycle of routine upgrades and patches.

Judges commended Rees and his team for the metrics used to pitch the business case and measure return on investment for the project, as well as the mechanisms set in place to gauge early feedback from users.

Accepting the award last night, Rees said the project highlighted the reason he first got into IT.

"It shows you what a tremendous difference technology can make to a great company, and how technology can really start to drive strategic advantage, and I love that about it," he said.

He thanked his "brilliant team" for bringing the project to life.