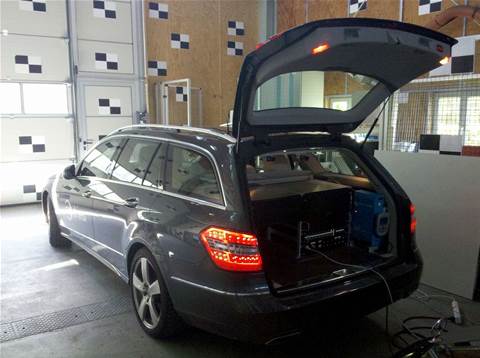 Teams with Mercedes to create vehicle for the common man.

Researchers at Curtin University have developed technology they say could mean an affordable autonomous car will be on the market for the average-income person within a decade.

Working with Mercedes Benz and Ulm University in Germany, Curtin University researchers created ‘eyes and ears’ technology by fitting more than a dozen sensors to a vehicle, paired with a specially written algorithm to process the data received and inform the car of the location and nature of obstacles.

The team of researchers, led by Curtin Associate Professor Dr Ba Tuong Vo, used commonly available sensors, radars, lasers and computer technology to ensure the car was commercially viable and could be produced at a low cost.

The researchers also avoided developing a system that would need to be connected to the internet in order to lower the vehicle's overall cost.

At the moment, the autonomous car is only able to drive in a straight line and sense its surroundings. The next step, according to project lead and Curtin Associate Professor Dr Ba Tuong Vo, is to equip the vehicle with systems (or a “brain”) that can direct it how to react to its surroundings.

“This will be difficult, as it is giving the car total control of all functions, unlike current driver assist technology that focuses on one purpose, such as alerting the driver when the car drifts out of a lane, or cruise control to keep at a certain speed,” Vo said in a statement.

Getting to that point will probably take another decade, Vo forecast - not to mention the legislative hurdles, specifically around insurance, that will need to be overcome.

“There are some interesting issues that will have to be dealt with moving forward, including what decision a car should make when it senses a crash, and also, whose fault an accident is – the car, the sensors or the driver,” Vo said.

“We can be certain that the technology is coming, but from now it’s up to potential users and government to decide the intricacies of how it will be used.”

The Curtin and Mercedes car, when complete, will compete with vehicles produced by the likes of Google, which has been working for several years on driverless cars.

Google's vehicles are kitted out with around US$150,000 worth of equipment - including a US$70,000 "light detection and ranging system" which involves a laser mounted on top of the car generating a 3D map of the environment.

In the United States, California, Nevada and Florida have approved tests of autonomous cars, while Nissan conducted the first public road test of a driverless car in Japan last year.

Gothenburg in Sweden has approved a 2017 trial of 100 Volvo autonomous cars, while the UK this July announced it would allow cities to trial the use of the vehicles on their roads.