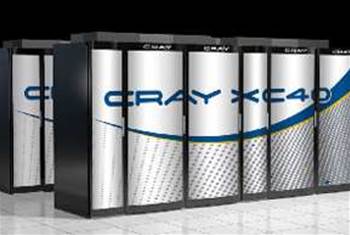 The Bureau of Meteorology has chosen Cray to build the agency's new US$59m (AU$77m) supercomputer in what will become Australia's largest.

The weather bureau first went to market for a replacement of its existing Oracle/ Sun-based high-performance computational (HPC) system in 2013, with an aim to improve its weather modelling capabilities.

It asked for a new system based on the specifications of the Australian Government’s ‘Raijin’ supercomputer -  built by Fujitsu - but which boasts 50 percent more power.

The BoM today announced its new Cray-built supercomputer would boast peak performance of 1.6 petaflops - 16 times faster than its current HPC.

Cray has been tasked with building, installing and maintaining the system until 2021, based on its XC40 series. The build will start in October and the supercomputer is scheduled to go live mid next year.

The BoM has also scheduled a planned upgrade for 2018 to make sure the supercomputer is meeting the agency's needs.

That upgrade will bring the new supercomputer up to 5 petaflops, according to the department.

The new hardware - combined with a next-generation forecasting and warning system and upgraded satellites  - will help deliver Australian detailed weather forecasts for a six-kilometre square region of their choice straight to their mobile phone.

“A new supercomputer will really be a gamechanger in terms of the skill and the utility value of the weather forecasts for emergency services in particular,” Dr Rob Vertessy, Director of Meteorology, told iTnews last year.

It will be the agency’s eighth supercomputer - its first was acquired in 1998 and was less powerful than an iPhone 5.

The increase in capacity will allow the BoM to deal with growth in the 1TB of data it collects every day, which it expects to increase by 30 percent every 18 months to two years. It will also allow the agency to collect new areas of information it previously lacked the capacity for.

"The Himwari 8 [new Japanese-owned satellite] is giving us a billion observation points per day. A great deal of that [growth] is that the satellites have much better sensors and are able to collect much finer, more detailed information.

"We're also looking at ground systems and radar systems as other great sources of observation data for the future."

"At the moment we're at about a 4km grid degree of resolution on the city models. By 2020 we'll be down to a 1km grid for the city model," she said.

"We'll also be running more regular and frequent updates - 24 times a day by 2020, where at the moment we run it four times daily. We'll also be able to run high, on-demand models for tropical cycles and run two extreme weather events side by side.

"The benefits to the community, the economy, emergency services, national security and various parts of the industry will be quite marked."

The government had promised to fund the build of the new supercomputer in its 2014 budget.