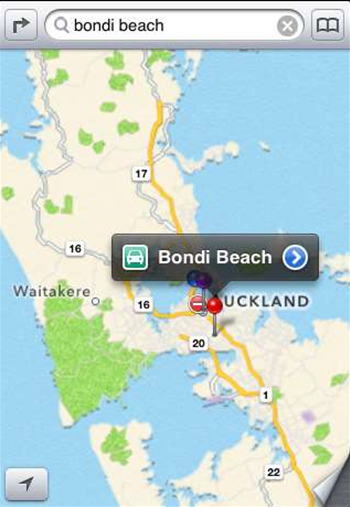 The CEO of Apple, Tim Cook, took the unprecedented step of apologising for the company's badly received Maps product over the weekend.

In a short message published on Apple's website, Cook wrote "we are extremely sorry for the frustration [maps] has caused our customers and we are doing everything we can to make Maps better".

While Apple gets its maps into shape, Cook said customers could use map apps such as Microsoft's Bing, MapQuest and Waze. He also said customers could direct their browsers to either Google Maps, which the Apple map service displaced in the iOS 6 mobile operating system upgrade, or Nokia Maps.

Apple replaced Google Maps in iOS 6 after a disagreement over whether or not voice-guided navigation should be featured in the update, according to a report in All Things Digital.

Apple maps has been widely panned by users and tech media as inferior to Google Maps and not ready for prime time, in a rare display of execution failure by the personal computing giant.

But in-depth trials of Apple maps show that it may not be quite as bad as some commentators have made out.

A comparative test of Google and Apple Maps by Consumer Reports in the US impressed reviewers with the graphic presentation for the interface, results, signage and points of interest information, suggesting that some of the criticism around map quality is misguided.

Instead, it may be Apple software using the map data from TomTom that is at fault, the independent review noted.

Nevertheless "Apple feels like a less-mature product"  compared to Google Maps and doesn't match the state of the art, it concluded.