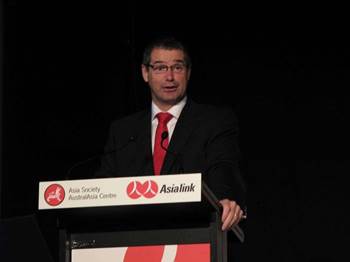 Communications Minister Stephen Conroy has joined an international delegation in talking up the opportunity for greater levels of citizen participation through ubiquitous broadband.

Speaking at the Asialink ICT forum in Melbourne yesterday, Conroy noted the NBN would allow Australians "to cooperate online no matter where they lived".

International participants in the forum backed the potential benefits of ubiquitous broadband but warned that a conscious effort was required to convert opportunity into reality.

Tim Williams, director of UK-based consultancy Publicani, suggested the NBN and similar projects were an opportunity to build a more networked society.

He described the NBN "as the source of a new wave of transformation," but noted efforts were required to make sure everyone could participate, particularly those currently without broadband access or the skills to take advantage of high-speed internet.

Williams noted the British Government's efforts to get seniors online – a policy area the Australian Government had also previously allocated some $15m in funding.

The British Government wanted every citizen to be online by 2012, allowing greater oversight of the public sector, as well as greater participation in politics, Williams said. However, there were still millions of Britons that had never been online, he noted.

Williams said that programs for 'digital inclusion' need not involve additional public expenditure, as all government departments should be looking for ways to encourage take-up and use of public services as part of their programs.

Multimedia Development Corporation of Malaysia (MDeC) chief Datuk Badlishan Ghazali told the conference that Malaysia's goal was to increase broadband penetration from the current 55 percent of homes to 75 percent by 2015, and 100 percent by 2020.

In addition to ensuring there was network availability, the Government had also set up programs to put netbooks into the hands of people that could not afford to buy their own access devices.

MDeC provided a "third voice" promoting the wishes of citizens with regard to digital government services, he said.

He also noted that Malaysia's existing national ID system for everyone aged 12 and over ("you can't leave home without it - it's a criminal offence [if you do]") made it easier to deliver government services online, and despite privacy and 'Big Brother' issues, Malaysians did want more such services.