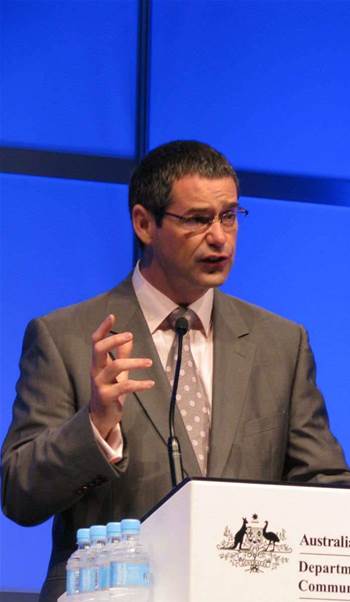 Political pawns of the telcos.

The Opposition sought to have their amendments to the bills accepted in the final text, with Senator Birmingham arguing the need for "very clear and emphatic ring-fencing of NBN Co to ensure it's a wholesale-only service".

Birmingham and others accused the Government of creating broad exemptions in amendments revealed yesterday that could allow NBN Co to deal direct with some companies - effectively becoming a service retailer.

The fear was that large corporates could obtain a carrier licence to take a direct feed from NBN Co for their own communications.

The Coalition sought to limit that possibility and exemptions that could allow it to occur in the legislation before the Senate.

Conroy said that telling customers of NBN Co what they could and couldn't do with a service was "Stalinistic".

"You should hang your head in shame," Conroy told Senator Birmingham.

"You want to tell corporations who pay for a service how they can use the service they've bought.

"You're saying they can only use it for one purpose. Talk about anti-competitive," Conroy said, between rising interjections from Liberal senators.

"Joe Stalin would be proud of you."

Conroy accused the Coalition of adopting a policy on telecommunications regulation that amounted to "just do Telstra's bidding".

"I appreciate you've been a wholly-owned subsidiary of Telstra for so long you've got a big orange T on your forehead," Conroy told Senator Birmingham.

When it came to the serious point to the Coalition's proposed amendments - preventing NBN Co from increasing its ambit by stealth - Conroy argued it could provide only a wholesale service.

"[Customers] can only buy a wholesale service [from NBN Co]," he said.

Debate was adjourned for the tea break.