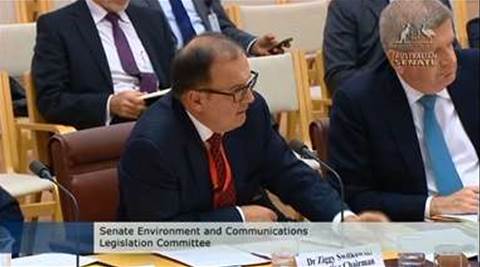 Setting the bar "as low as a pencil on the floor".

Senator Stephen Conroy has accused NBN Co chief Ziggy Switkowski of changing his story "to suit [his] own facts" when it comes to rollout targets set out in the organisation's strategic review document.

Conroy pointed out NBN Co contractors are currently passing an average of close to double the premises required to meet the June 2014 target of 357,000, as set out in the review.

"NBN Co's weekly average for brownfields premises passed over the last 17 weeks is about 4500. If you exclude the two-week Christmas shut down where contractors appear to have downed tools, it comes to 5078," he said.

"Now if you extrapolate 5000 premises, which is less than your own chief operating officer is indicating, to the 30th June...then NBN Co gets to slightly more than 400,000 premises," he said.

"Because of the slowness of that rollout, the completion date in the strategic review gets to be pushed out to 2024."

Conroy said the weekly run rate was even slower than what was being achieved when then-opposition communications minister Malcolm Turnbull accused NBN Co of being "an arthritic snail".

"If you set the bar as high as a pencil on the floor you can get over it," he said.

While Switkowski admitted he did "hope to be in front of the committee after June explaining how we did better than the earlier forecasts" he said 17 weeks was not enough time to generate estimates for a ten year plan.

"I would never, with three percent of the task done, revise my estimates ten years out on the basis of that experience," he said.

He said any number of factors could affect the run rate of premises passed, a lesson NBN Co had learnt the hard way previously.

"The total investment to date for NBN Co is $7 billion for three percent of the build. If you extrapolate that by a factor of 30 you get $210 billion. Is that a sensible thing to do?" he retorted.

In a heated exchange, Conroy also accused the Coalition of deliberately cuttting the amount of time given to the Opposition to quiz NBN Co, and told Switkowski he would be expected to return to the estimates committee at a later date as a result.

Switkowski took umbrance at accusations of a lack of transparency, and said it was the fifth time NBN Co had appeared here in the past three months.