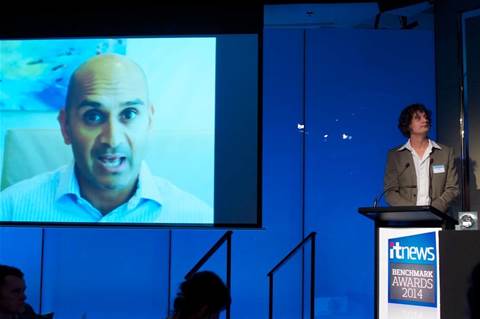 Sanjay Mehta, IT Manager at the Australian operations for Houston-based oil and gas giant ConocoPhillips, has been named Industrial CIO of the Year at the iTnews Benchmark Awards.

Mehta was awarded Industrial CIO of the Year after his staff put forward a submission for his work in ConocoPhillips’ Integrated Safe System of Work.

The project impressed judges and CIO peers for the way Mehta’s team made a business case that married the company’s safety objectives with productivity gains.

The success of the project was highlighted by the prospect of it being rolled out to ConocoPhillips operations across the globe.

“On behalf of ConocoPhillips, I’m please to receive this award,” Mehta told delegates at the Benchmark Awards ceremony in Melbourne via a video address from Perth.

Mehta thanked the project’s sponsors and steering committee for “empowering the IT organisation” to deliver the solution. He said the award recognised the work of an IT organisation spread across the globe, an organisation that should be “proud of its commitment to safety, innovation, project execution and technical excellence.”

The ConocoPhillips project was celebrated alongside equally compelling submissions from engineering giants Worley Parsons and construction company Hanson - both projects that encouraged collaboration across geographically-dispersed workforces.