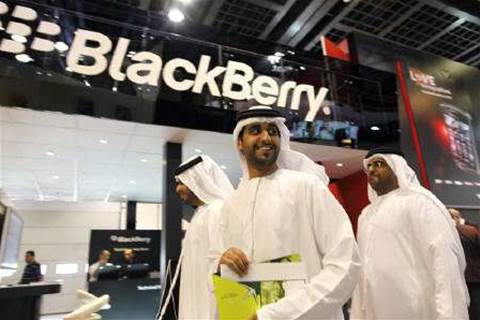 No more private data services for individuals and small businesses.

The United Arab Emirates will stop individuals and small businesses accessing the most private data services offered by BlackBerry, according to a report in a prominent UAE newspaper, but the government claims that no services would be disrupted to any subscribers.

Only businesses with 20 or more subscriptions will be allowed to use high security accounts on the BlackBerry Enterprise Server, which allows for services such as highly secure corporate email, The National newspaper reported on Saturday.

The move comes months after the UAE dropped a threat to suspend BlackBerry services after resolving a dispute over access with Canada's Research In Motion.

It also coincides with efforts by Arab states to stem rolling pro-democracy revolts, largely organised on social media, that have hit all but two Gulf states, the UAE and Qatar.

Citing a ruling by the UAE's telecoms regulator, The National said that small businesses would still be able to use the BlackBerry Internet Service, which does not rely on private servers, as well as encrypted messaging.

UAE officials had no immediate comment but the Telecommunications Regulatory Authority said on its website that BlackBerry services including messenger, email and internet browsing would continue without disruption to all customers.

It said it would clarify "any confusion" in the coming week, but gave no further details. The paper said the ruling would come into effect on May 1.

RIM, which encrypts email messages as they travel between a BlackBerry device and a computer known as BlackBerry Enterprise Server (BES), said it had been in contact with the regulator which relayed that the rules were not specific to BlackBerry.

"The TRA has confirmed to RIM that any potential policy regarding enterprise services in the UAE would be an industry-wide policy applying equally to all enterprise solution providers and with the intent of avoiding any impact on legitimate enterprise customers," it said.

Last year, the UAE threatened to suspend BlackBerry Messenger, email and web browser services unless RIM worked out a way to locate its encrypted computer servers in the country so the state could get access to email and other data -- the same access it claims the United States, Russia and other states have.

The UAE, which like many Gulf states has little tolerance for dissent, had voiced concerns over its inability to access information legally, citing security and sovereignty issues.

But the nation resolved its dispute with Canada's RIM days ahead of an October 11 deadline. The UAE gave no details of what RIM had agreed beyond stating that BlackBerry services had become compliant with UAE telecoms regulations.

That dispute and others in the region highlighted growing nervousness at the time over regional security threats, ranging al Qaeda militancy to worries over Iran's nuclear work.