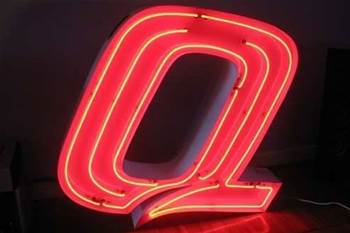 It isn't everyday building signage goes up for sale. But for those who keep a little place in their heart for long-gone PC vendor Compaq, that day has come.

Mysterious eBay seller "chairmanmeow2009" has posted for auction the 'Q' from the Compaq neon sign, which they claim once adorned the Compaq building in North Ryde, Sydney.

The item, currently sitting at $100 and with five days to go, appears to be a rare piece of memorabilia for companies once found and now lost to the ages.

The seller -- a former Compaq staff member -- told iTnews the 'Q' of the logo has "adorned many a xmas [sic] party and event" since coming off the building, when HP bought the manufacturer in 2003.

The logo was first designed in 1982 and has since been restyled, leaving the 'Q' little more than a relic.

For what it's worth, the letter still seems to light up.

"I've had interest mainly from collectors and trivia buffs, as well as a reseller," the seller said.

Unfortunately, the letter is a once-off event; the other letters are nowhere to be found, at least by this seller.

Now has anyone seen what happened with the Sun logo from North Sydney?