The Australian Telecommunications Users Group has announced it is closing its doors. David Havyatt asks if Australian business is, like George W. Bush, announcing “mission accomplished” too soon.

The Australian Telecommunications User Group is closing down.

ATUG chair David Swift said today’s vibrant telecommunications environment owes much to the efforts of the organisation over the past 30 years. He claimed that the achievements of the past three decades have also meant that the ongoing requirements and priorities of end-users have changed.

Her departure was followed by the abandonment of successive Digital Economy Stakeholders Forums.

Swift then took up the case of arguing the NBN was anti-competitive, a monopoly that would result in rising costs. It seemed an attempt to rekindle the old ATUG spirit of “getting stuck into the government”.

Understanding the challenges faced by ATUG, and the spirit undertaken by Swift in the group’s dying days, can be found in its origins.

The needs of business

The organisations active in forming ATUG thirty years ago were large businesses keen to use the improved functionality of third generation PABX networks for distributed data processing.

Telecom Australia’s restrictive practices at the time prohibited interconnection of PABXs that allowed businesses to enable call “by-pass”. It wanted businesses to connect to the telco’s own DATEL data products and, even then, only through Telecom-approved modems that operated at speeds failing to near those available in the US.

In addition, a series of industrial disputes at the Telex exchange in the 1970s had revealed businesses’ vulnerability to telecommunications disruption. They also rejected the notion of having to cross-subsidise residential services.

These firms simply wanted to use information and communications technology, an effort they believed was impeded by the incumbent telco of the day.

For these businesses, telecommunications competition was a means to an end, not an end in itself. What they were agitating for was a policy position that enabled them to achieve the biggest benefit for their organisations.

‘Competition’ happened to be their chosen solution, one that resonated with other popular currents; businesses had also become concerned about the high cost and poor quality of banking services, of transport services and of energy provision.

In each of these cases the introduction of “competition” was identified as the solution.

ATUG was formed at the beginning of what academics Ross and Feeny described as the “distributed era” in business IT. For most businesses in the 1980s, procuring voice services was part of the property function, which often also procured the few data services required. 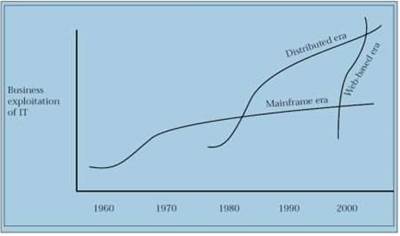 Eras in business exploitation of IT (Source: Ross and Feeny 1999)

But the early 1980s saw the emergence of the Chief Information Officer as a recognition of the strategic importance of IT, ridding the company of IT islands and providing a direct report to the CEO.

Progressively, the procurement of all communications services has become the responsibility of CIOs who don’t see themselves as “telecommunications users”. In the web-based era there is a perception that domestic policy issues are either irrelevant or inimical to the ethos of globalised information systems.

Thirty years on, ATUG was still seen by many, including its board, as being exclusively about competition in telecommunications.

When asked if he believed there would be a need for a similar organisation in the future when, and if, the NBN 'monopoly' is established, Swift told ITWire: "Absolutely. There will be a need for a business-based lobbying organisation but I don't think that need will become apparent for at least two years. Then we will see the cost structures change and people won't be so happy."

This completely misconstrues the history of the group and the market it purported to represent. Competition and low prices were not the primary mission; access to services were.

It also misconstrues contemporary policy. Business does not, in general, lobby for “competition” any more.

ATUG’s mission was to get the policy outcomes necessary for business to make the most of the distributed era. Making the most of the web-based era is really what the “digital economy” strategy is about – delivering the benefits of IP-enabled services.

The question now is how will the business community more generally seek to influence the development of communications policy? The Australian Computer Society is an association of IT professionals, not a policy group.

The Australian Information Industry Association - which Swift suggested was the best fit for a possible merger - has branded itself as “the voice of the digital economy” but it is a supply-side outfit, not a user or demand side one.

Communications policy is too important to be left only to the lobbying efforts of residential consumer advocates and the supply industry. Somewhere the combined interests of the business community needs to find a new voice. A Digital Economy Stakeholders Forum would be a good place to start.

Does the business community need a coordinated voice on digital economy policy?

(Readers interested in the forces for change in the telecommunications industry globally in the 80s and 90's should refer to Eli Noam’s 'The Public Telecommunications Network: A Concept In Transition' or the introduction to his book 'Telecommunications in Europe'. For an Australian perspective, Ian Reinecke and Julianne Shultz' 'The Phone Book' provides an excellent summary).