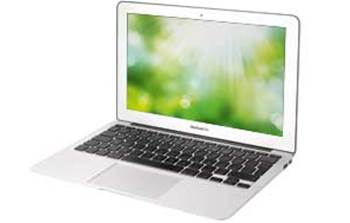 Commonwealth Bank’s Sydney workers will be the first to move to an activity-based workplace this year.

This week, staff were notified that they would receive 11-inch MacBook Air laptops instead of Dell desktops when they moved to the new Commonwealth Bank Place at Darling Walk.

The move was flagged in September 2008, when CBA committed to a long-term commercial lease of the six-star Green building.

The six-storey building being built will accommodate more than 4000 staff.

According to an internal email sighted by iTnews, most will be issued 11-inch Macbook Air notebooks; devices with bigger screens may be issued depending on need.

Staff are expected to continue using Microsoft’s Windows operating system to avoid them having to get used to new software.

“It is just a hardware change,” the bank wrote.

Instead of desks and offices, Commonwealth Bank Place will have docking stations, each with a 24-inch LCD screen, mouse, keyboard, and network access.

Untethered devices will connect to a building-wide wireless network and staff will use VoIP softphones and Microsoft Office Communicator through a headset.

For printing, scanning, copying and faxing, multi-function devices will be installed on each floor.

The facility will have LCD collaboration screens and smart whiteboards for presentations.

“You can connect your laptop to any ‘smart’ board and the whole board will become your giant computer screen,” it told staff.

“You can open files, presentations, websites etc by touching the screen, and you can use electronic pens to circle, underline and make notes on the screen – everything can be saved to your normal network folders.

“You can also put the ‘smart’ board into whiteboard mode, and make pages of notes with the electronic pens – again everything can be saved to your normal network folders.”

In the absence of designated workspaces, staff will have access to individual lockers and ‘team’ facilities for storing items like centralised reference material.

The bank's decision to buy MacBook Air laptops also came as a surprise to the analyst, who noted that Apple had traditionally struggled to provide enterprise-level support.

But he expected technical hurdles to be easily overcome, as long as the deployment had appropriate planning and leadership.

“There is a trend within some of the larger enterprises and organisations not fixed to the desk,” Clarke told iTnews. “The technologies are mature enough.”

The Macquarie Group introduced activity-based working in 2009, when it moved into its Shelley Street, Darling Park facility that featured lockers, meeting rooms and libraries (audio).

ANZ Bank also embarked on a proof-of-concept trial in New Zealand that year. iTnews was unable to reach a spokesman for comment at the time of publishing.

Clarke suggested that such trials be assessed on use cases, business needs, and total cost of ownership.

A CBA spokesman would not reveal plans to support activity-based working at other facilities, stating only that the move to Darling Walk would occur in the second half of the year.