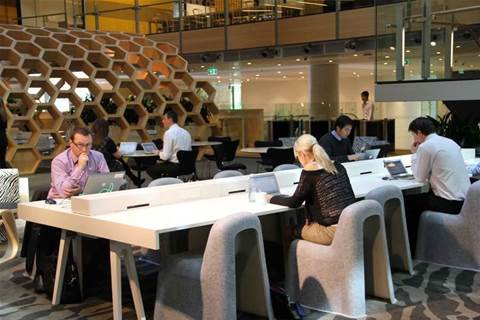 The Commonwealth Bank has asked its technology suppliers to address user experience issues after deploying some 6000 MacBook Air devices in its new “activity-based workplace” last year.

Between June 2011 and February 2012, the bank issued a total of 6200 MacBook Air, MacBook Pro and Dell laptops to staff at Commonwealth Bank Place, in Sydney’s CBD.

But sources say some staff have been unhappy with the move from CommBank’s traditional Dell workstations because of performance issues and software bugs in the Apple machines.

A Commonwealth Bank spokesman said it actively sought staff feedback on their experiences with the new technology and would continue to work with them to facilitate the transition.

He declined to discuss feedback the bank had received but said CommBank was “working proactively with our various technology service providers” to improve user experience.

“The move to the new premises and introduction of activity-based working is a significant change for staff, and we continue to work closely with staff to ensure a smooth transition,” he said.

“This includes giving staff numerous opportunities and ways to provide feedback on all aspects of their new environment, including their experience with workplace technology.

“We are using this feedback to identify ways to further improve their daily working experience.”

According to IDC software analyst Vanessa Thompson, software issues may have arisen from how the MacBook devices – which typically run Apple’s operating system – were configured to boot directly into Windows.

But if CommBank required software to be customised, it may have affected application speed and reliability, she said.

“With the Airs configured to boot the Windows XP SOE directly from the bare-metal machine, HP may have had to re-code some of the applications to execute in this manner," Thompson said.

Although enterprise applications tended to run on the Windows operating system (OS), Gartner expected the number of OS-neutral applications – such as browser-based applications – to surpass those that required Windows this year.