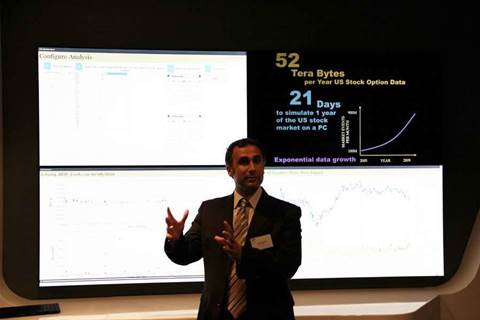 The Commonwealth Bank is building a data mining platform that will allow it to offer personalised loans and credit card accounts based on individual customers’ habits.

The platform was developed by research organisation NICTA based on the Hadoop framework, which is used by the likes of Facebook, eBay and Yahoo for handling large amounts of data.

It was installed in the bank last month, following a six-week pilot in October 2011.

Commonwealth Bank chief information officer Michael Harte did not disclose when the Hadoop platform would influence the bank’s commercial products, nor how the products would be impacted.

“We’ve got data scientists throwing new questions at it every day,” Harte said.

Facebook uses Hadoop to process and store some 30 petabytes of data and provide website owners with real-time analytics about how users of the social network interact with content (pdf).

Meanwhile, US retailer Target made headlines this month for running predictive analytics on its big data sets to identify and advertise to shoppers who were most likely to be pregnant.

According to NICTA researcher Rami Mukhtar, similar technology could shape Australian retail banking products like internet banking within the next 18 months.

Mukhtar declined to name NICTA’s industry partners but noted that the big data crunching platform was “finding most traction in the retail banking area”.

“There are banks here in Australia that are currently testing this technology,” he said. “I believe that they will be looking at production pilots in the next 12 to 18 months.

“Internet banking for example, will be better tailored for how you interact with the bank. It won’t be apparently visible, but the bank-end technology will give you a better experience as a customer.”

Further down the track, Mukhtar said Hadoop would allow banks to make decisions based on very granular customer profiles – such as how smaller lenders manually assessed mortgage applications.

He explained that large banks typically determined the maximum amount to lend a customer based on “coarse-grained” demographics that split the population into a hundred market segments.

“What that enables a retail bank to do is to say that for this particular customer, I can now tailor a product which will meet their needs and won’t increase risk for the bank,” Mukhtar said.

"Traditionally, if you had a personal relationship with each of your customers, you could have done this. But when you’re looking at bigger organisations, they’re not able to have that sort of personal touch."

Mukhtar and Harte separately warned that digital players like Google, PayPal and Facebook would become formidable competitors in Australia’s financial services sector unless banking IT improved.

Harte told banking IT representatives at the iTnews Executive Summit in Sydney last week that Google and Facebook were already the “online gateway of choice” for many Australians.

Those organisations were seeking to “conquer new territory by owning more of the customer relationship ... [including] the financial relationship, which has traditionally been ours,” he said.

Despite growing public awareness of online privacy risks, Harte noted that individuals were offering up more of their social, personal and financial data “in exchange for value”.

“Personal data is the new oil of the internet and the new currency of the digital world,” he said, quoting a speech made by European Consumer Commissioner Meglena Kuneva in 2009.

“There’s clearly a real opportunity here for us all, if we will be bold.”