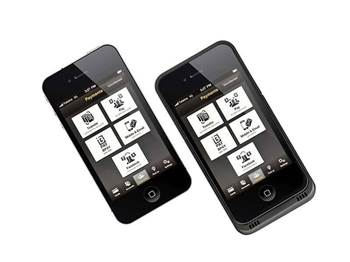 iPhone handsets without and with the iCarte case. Credit: Commonwealth Bank

Commonwealth Bank customers will be able to make contactless payments from their iPhone 4 and 4S devices within the year through the bank’s ‘Kaching’ app, launched today.

The bank is the first in Australia to integrate near-field communications (NFC) technology with smartphone software in a commercial application, despite various trials since 2007.

Analysts speculated earlier this year that the Australian market lacked the scale, need and partnerships required for contactless phone payment options to emerge.

“We believe that there have been just shy of half a billion NFC chips ordered worldwide, and all those chips are going to go into some sort of a mobile device,” he said.

It enables not only contactless payments but also peer-to-peer payments through Facebook, email and SMS.

Because the iPhone does not have native NFC capabilities, Commonwealth Bank will issue customers with an iCarte 420 case by Canadian vendor Wireless Dynamics.

iCarte is also used by the Turkish Yapi Kredi bank and the Coventry Building Society in Britain, in partnership with Visa Europe.

Kaching, which was developed by an agile, in-house team, relies on iCarte’s antenna and secure element to communicate with other NFC payment devices within a four-centimetre radius.

He described the iCarte case as an “interim technology”. Earlier this month, Westpac described its trial of an NFC sticker as a “bridging technology” ahead of the widespread adoption of NFC-enabled phones.

But Commonwealth Bank’s application “isn’t a sticker; this is a totally integrated banking experience”, Lindberg said.

The bank invited customers to register for Kaching today in preparation for a rollout within the year.

It also planned to develop an application for the 12 percent of its mobile banking customers who used Android devices but was yet to determine a timeline for the Android project.

Telcos out of the picture?

Before a “serious … transformation of payments” could take place, Lindberg said there needed to be an “open ecosystem” involving various sectors such as banking, marketing and technology manufacture.

“The inherent problem with payments is as a business, there is not that much money to be made,” he said, explaining that this deterred investment in the area.

“You need partners to bring something to the table; we have the perfect collection of partners … all of whom make money in another business that is made stronger by their participation in payments.”

For Kaching, Commonwealth Bank has partnered with Apple, MasterCard for its network of contactless POS terminals, and Facebook to allow users to pay their friends.

Previous NFC trials have involved telecommunications service providers like Telstra, but the bank made no mention of telcos when discussing Kaching today.

“This is about winning new customers and keeping them, not about revenue,” he said, speculating that Kaching could tie into airline and credit card loyalty programs through the bank’s partnership with MasterCard.

Farmer speculated that telcos were unlikely to enter the payments space, noting that strong telco-bank partnerships would likely fragment the market.

“There was a time where there was the possibility of partnering with telcos, but that time is long gone,” he said.

But telcos could participate, he said, by contributing intelligence about users’ location and travel – especially since Apple did not allow applications to track users’ movements when they were not open.

By analysing network parameters, telcos could determine whether a user was at work or in transit, and marketers could target their advertisements accordingly, Farmer suggested.

Commonwealth Bank’s chief information officer of retail and business banking, Adam Bennett, said the bank would track where and when Kaching was used. He said that no sensitive data was cached on the iPhone.

“Analytics about what customers are doing, where they’re doing it and how they’re interacting with others is something that lots of organisations are looking to take advantage of to provide offers that are specific to customers needs,” he said.

“There’s no specific new data that [Kaching] is storing but it is capturing a lot of information about how and where customers are interacting and making payments.”

Bennett said the Commonwealth Bank was “looking to partner with a range of organisations … where that’s going to add value”, but would not name any potential partners.

In time, Kaching could facilitate payments within Facebook though “better integration … where it can provide value”, he said, noting that “this is really the start of the journey”.

Lindberg expected “a lot of the investment” in NFC to come from marketing companies looking to drive and profit from commerce by serving up more relevant advertisements based on the location and preferences of a potential customer.

“The problem you have with a mobile phone is it’s very difficult to actually make a payment from the phone,” he said.

“If you can close the loop from [advertisement to payment], then the ads become a whole lot more valuable.”