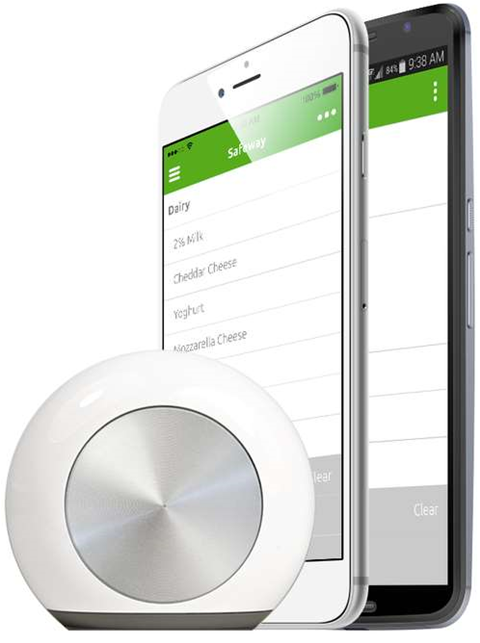 Coles is testing out a piece of hardware that allows shoppers to use voice recognition to add items to their online shopping baskets.

The supermarket giant has offered 50 of its customers a Hiku - a puck-shaped device which transmits voice data to a Coles mobile shopping list app or online order - for two months to test out, in partnership with Accenture.

Customers use the device to add an item to their list on the go as they think of it. The Hiku can also scan barcodes of existing items to add to the list.

The Hiku is available in the US for US$79, but does not currently retail in Australia. The device itself comes with a magnet to allow it to be attached to the fridge.

Customers will need to connect the device to a wi-fi network - the same network the user's smartphone is using - for it to work.

The Hiku is charged through a microUSB port and boasts a two-month battery life. Its speech recognition software is provided by Nuance.

Coles online general manager Mark Cripsey said the Hiku pilot was one of the first in a number of similar experiments he was looking to undertake.

"We are trying to build up a pipeline of experiments like this. In a traditional big company, you might be thinking about something for a while, writing requirements for months, looking for funding, building it, and the whole project might take a year - we're trying to move a lot quicker than that," he told iTnews.

"If it works, great, if it doesn't, we'll pivot and do something different. It's the way we need to think when we're working with digital."

The Hiku trial signals the introduction of a more formal methodology to how Coles tackles innovation, according to Cripsey.

"I'm [trying to introduce] a disciplined process of experimentation, testing, validating results, and having the courage to stop things if they're not working."

Cripsey cited efforts such as 'recipe to cart' project with recipe website Taste - which integrates a recipe's ingredients straight into the online shopping trolley - and the Coles Express click and collect offering as examples of similar innovation experiments.

"The key thing to this pilot and Taste is we are trying to solve real problems," he said.

"Hiku may be the solution, or it may not. That's the point of the trial. We feel - like many companies - that to really innovate we have to tap into the start-up ecosystem whether that's in Australia, Silicon Valley or anywhere else in the world."