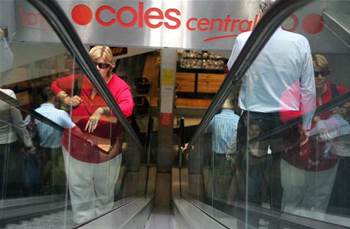 Coles will expand its click-to-collect offering to over 520 more supermarkets nationally by the end of the financial year as it plays catch-up with rival Woolworths.

In financial filings, Coles said it would roll out click-and-collect across its supermarket and Coles Express networks.

It currently has 280 sites nationally that support click-to-collect, and the expansion will mean “more than 800 sites” being enabled by the end of FY18.

Coles has been in the click-and-collect space since 2011.

However, rival Woolworths leaped into the space and ahead of Coles when it unveiled a revamp and rapid expansion of its own click-and-collect product, which it calls Pick Up, last year.

In September Woolworths added 670 stores to the Pick Up service - for a total of 970 locations - within the space of just one month.

Coles' expansion of its own program means both supermarkets will have duelling national click-to-collect offerings.

Both have trialled - or are trialling - different business models for online shopping, such as Woolworths’ grocery lockers at train stations, and Coles with a personal shopping service through marketplace Airtasker.

Also today Coles’ parent Wesfarmers said it would set up a “group centre of excellence … to support data/digital innovation and growth”.

It wasn’t immediately clear what role the subsidiary brands would play in that group-wide capability, but Wesfarmers led its results briefing with a commitment to “develop our digital and data capabilities”.

Wesfarmers otherwise saw a huge fall in net profit for the first half, caused by ongoing issues with its Bunnings UK division.