Coles recovers from nationwide IT outage 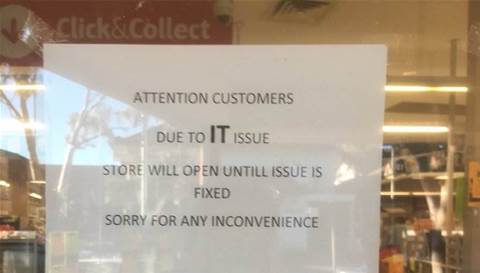 Supermarket giant Coles suffered IT issues that impacted stores nationwide on Sunday morning with multiple reports that its computer systems and registers were down and stores closed.

Photos posted to social media by customers showed various signs on stores, some directly blaming an “IT issue” and others simply saying the cause was “beyond their control”.

Other signs pointed to a “network error” that had left the supermarket’s registers offline and to “system issues”.

The issues appeared to have started at about 9am. Stores started to come back online and resume trading at 10.15am.

Customers posted photos of long queues at stores that had already opened by the time the problems hit.

A Coles spokesperson told iTnews that "all Coles supermarkets are [now] open and trading."

"Earlier this morning we had some minor IT problems in some of our supermarkets which were out of our team members’ control," the spokesperson said.

"We apologise for any inconvenience our customers experienced earlier this morning."

The spokesperson did not respond to questions about the cause of the outage.

However, the wording of the statement appeared to indicate the problems were with outsourced IT systems rather than those directly under Coles' internal supervision.