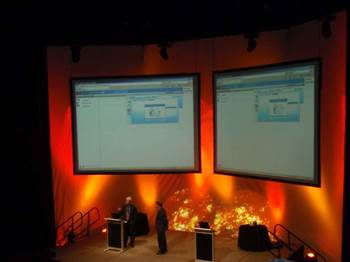 Cognos has previewed a new customisable dashboard for its business intelligence tools based on Adobe’s Flex technology.

The new rich dashboard design will provide individual users with a way to assemble, use and customise data easily based on their own information needs (see photo gallery right for screenshots).

Engaging consumers of information in the enterprise will be a hallmark of the next generation of business intelligence (BI), according to Rob Ashe, general manager of IBM business intelligence and performance management, and former president and CEO of Cognos prior to its acquisition by IBM.

“What we gave up to push dashboards out to thousands of users is the flexibility for people to customise them according to what they want to see,” Ashe told iTnews.

“We’ve really just acknowledged that for customers by delivering this Flash-based capability.

“It will enable us to provide a lot of interactivity on the desktop by letting consumers of data bring some data down into the browser and manipulate it in real time,” Ashe said.

In a brief preview, Mark Morton, senior manager for BI product marketing at Cognos, showed off the template-styled design to delegates at this year’s Cognos Forum conference.

Morton showed how it was possible to change the parameters on a geospatial map and have it automatically and fluidly update surrounding bar charts feeding off that data.

Users can also drag-and-drop the elements they want to see in the template and change the position, size and type of graph according to their preferences.

The company also demonstrated some other forward-looking lab developments it is working on in conjunction with new owner, IBM.

Among these innovations were Decision Desktop, which uses social networking concepts to allow users to build internal communities and invite feedback on particular issues.

Cognos also touted dimension management as a future technology that would enable organisations to let their users define the business in dimensions but have some central management and control over the process.

The technology, referred to as Business Viewpoint, was earmarked for an October release.

Ry Crozier attended Cognos Forum as a guest of Cognos.
Got a news tip for our journalists? Share it with us anonymously here.