Clinton urges world to stand up for internet freedom 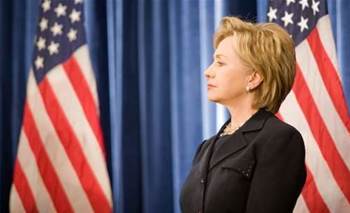 US Secretary of State Hillary Clinton, as promised, has given a speech in which she stated that the US government would be actively working to keep the internet free.

Secretary Clinton said that countries that censored their internet access left their own companies at a disadvantage in the global marketplace and stated that the US would be actively working to keep the internet open to all.

“On their own, new technologies do not take sides in the struggle for freedom and progress, but the United States does,” she said.

“We stand for a single internet where all of humanity has equal access to knowledge and ideas. And we recognise that the world’s information infrastructure will become what we and others make of it. Now, this challenge may be new, but our responsibility to help ensure the free exchange of ideas goes back to the birth of our republic.”

While Secretary Clinton declined to criticise China implicitly, she did call for the Chinese government to conduct immediate and transparent review the hacking allegations raised by Google and others.

“Some countries have erected electronic barriers that prevent their people from accessing portions of the world’s networks. They’ve expunged words, names, and phrases from search engine results,” she said.

“They have violated the privacy of citizens who engage in non-violent political speech. With the spread of these restrictive practices, a new information curtain is descending across much of the world.”

She continued that American companies should take a “principled stand” on behalf of internet freedom, and that would become part of the American brand.

“We are urging US media companies to take a proactive role in challenging foreign governments’ demands for censorship and surveillance,” she said.

“The private sector has a shared responsibility to help safeguard free expression. And when their business dealings threaten to undermine this freedom, they need to consider what’s right, not simply what’s a quick profit.”

The government would be holding meetings with key industry players to hammer out a more coherent policy she said.

“Secretary Clinton is to be commended for raising Internet Freedom to the level as a major element of our foreign policy. Her speech served to highlight the incredible benefits that come from a free, interconnected network,” said Gigi B. Sohn, president and co-founder of think tank Public Knowledge.

Got a news tip for our journalists? Share it with us anonymously here.
Copyright ©v3.co.uk
Tags:
chinaclintonfreedomgooglehackinternetsecurityweb