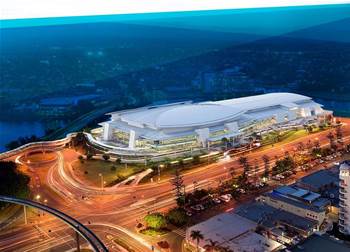 Some digital city initiatives came into play for the Commonwealth Games.

City of Gold Coast council is exploring three potential uses for blockchain as part of an ongoing digital city initiative.

Nishitani did not provide further detail on how the trials were tracking, though in a slide she noted that some of the work on blockchain was not expected to be in production until 2021.

AWS only launched blockchain-as-a-service in June this year.

The City of Gold Coast has stood up a data analytics platform in AWS to optimise some of its digital city initiatives, including smart parking and flood mapping.

The council has also deployed an extensive fibre optic network and 200-plus wifi access points to improve connectivity.

“So far we have our parking solution in production, and we’re already seeing benefits in having data analytics in the cloud.

“We’ve reduced our costs in resourcing as we’re able to better plan our routes for coin collection around 200 parking meters across the coast.”

The smart parking solution also meant that people could find open parking spots and top up meters automatically via a smartphone app.

For council, it is able to run analytics on meter performance, checking which meters are most profitable on a map interface and drilling down to an individual transaction level how parking fees are paid.

“This is extremely useful for auditing and other reporting purposes,” Nishitani said.

City of Gold Coast has also re-platformed a flood planning system to run on AWS.

“Our interactive flood map built out of AWS serverless components,” Nishitani said. It shows “actual water level fluctuations … based on data ingested from the Bureau of Meteorology using tide and rainfall data which includes historical and forecast information.”

Re-platforming the flood solution from on-premises equipment to AWS was fast and based on immediate necessity.

“We were literally putting out fires as one of our on-prem flood servers caught on fire and the whole building had to be evacuated,” Nishitani said.

“To add to that, the on-prem flood solution had multiple issues that could not be troubleshooted and had no temporary workarounds.

“So we had to get a working flood solution in the cloud before an actual flood hit the Gold Coast. Then we saw this forecast that we were going to get one month’s worth of rain across the weekend. And so it was a race against Mother Nature.

“We managed to get a working flood solution in the cloud.”

In addition to blockchain, Nishitani flagged several other projects in the pipeline for the digital city initiative.

This includes an artificial intelligence initiative “to gain better insight into our residents and visitors” and the potential use of augmented reality to help tourists on the Gold Coast navigate between destinations.