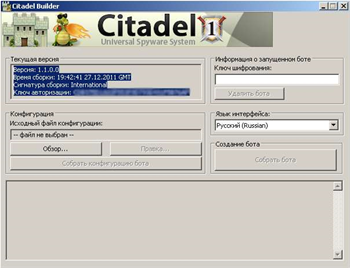 RSA says the ousting of Aquabox is just the latest indication that the Citadel network is headed further underground.

A key Citadel developer has been banned from one of the largest online sites that sells the banking trojan.

Experts say it is another sign that Citadel developers are steadily withdrawing from the commercial market to privatise their operations.

The developer, “Aquabox,” was banned from an online forum after a Citadel buyer accused him of “becoming corrupt by all the money Citadel was earning him,” according to RSA.

Citadel's sellers began threatening to pull the Zeus variant off the open market in July to fend off interference by law enforcement. The trojan entered the market in January, selling for $2,399, and as of October, the sixth edition cost $3,391.

Citadel, along with other banking trojans, usually infects users through spam messages or via drive-by download campaigns.

Banking malware often aims to steal account login credentials to transfer money to attackers, either in the background or by hijacking victims' computers.

“The recent accusations against Aquabox are only one of many hints that confirm the very imminent withdrawal of the Citadel trojan, as its developers change their business model from offering it as commercially available crimeware to a much more selective and privatized operation,” the blog post said.

“Although the Citadel developers are not as interested in new buyers today, the team may still return to cybercrime forums or devise another business model in an effort to return with more news in the future,” the post said.

Got a news tip for our journalists? Share it with us anonymously here.
Copyright © SC Magazine, US edition
Tags:
citadelmalwarersasecurity