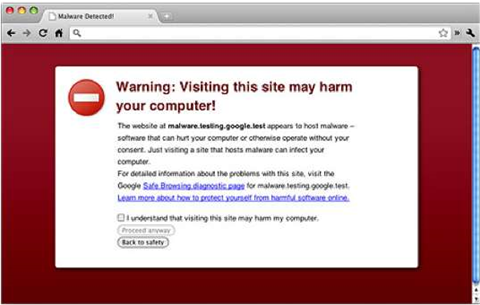 Google has released a beta version of its Chrome 17 browser that scans for malicious downloads, which may help tackle scareware threats.

The browser will issue a warning to discard a file when a user attempts to download a known bad file or if the file comes from a site known to host malware.

The new features build upon Google's Safe Browsing system which warns if a site should not be trusted, but does not have a feature to detect malicious files from the web.

The blacklist used in the beta version is small but Google will be "ramping up coverage" in the coming months, engineer Dominic Hamon wrote in a blog post.

The researchers suggested the companies share their malicious URL data to improve protection.

Chrome 17 will also load web pages faster by second-guessing the URL the user intends to visit, cutting down the time between hitting enter and the page being fully rendered.

"If the URL auto-completes to a site you’re very likely to visit, Chrome will begin to prerender the page," explained Hamon.