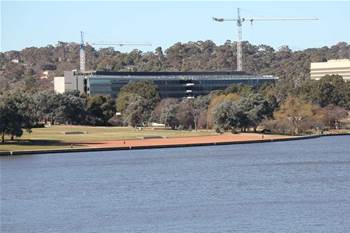 The move into ASIO's new Central Office has reportedly been delayed by a Chinese hack attack. Source: ASIO

Chinese hackers have stolen the blueprints for the new $630 million ASIO building in Canberra and siphoned reams of emails from the Department of Defence.

It said the plans were stolen from a contractor working on the site.

ASIO now faces a decision to either gut and redesign the building, or continue at a heightened state of caution, according to the program.

The attack was cited as a reason for the delay to the building's completion.

In another attack, troves of unclassified Department of Defence emails and reports were stolen, also allegedly by Chinese hackers.

A Four Corners source said the documents stolen over years from the military-wide Defence Restricted network amounted to ten times the total size of the database.

A highly classified document was also stolen from Defence after it was sent off the corporate network to an officer's home computer.

Malware, previously installed on the officer's machine via a spear-phishing attack, grabbed the document and sent it to China where it was later discovered by a US intelligence agency that tipped off Defence.

Chinese attackers were also reportedly behind the theft of a highly sensitive document from the Australian Secret Intelligence Service (ASIS). The document, rated higher than confidential, detailed a project that a Four Corners source said would give China a “significant advantage when dealing with Australia.”

The Department of Prime Minister and Cabinet was also breached after hackers, again reportedly linked to China, broke into a vulnerable Department of Tourism portal and traversed from there into the core network.

“There is a great deal of intelligence material, espionage-related material that we do not comment on. That has been the long-standing practice of Australian Governments for many decades [and] I am proposing to continue that practice,” Dreyfus said.

The program also revealed that Adelaide company Codan, which manufacturers portal-encrypted radios used by Australian, US and British militaries, had design plans for an Australian-made metal detector stolen by Chinese hackers.

“It was not until these [counterfeit] products came back to the service centres because they were not operating correctly and some of our dealers opened them up and saw that something was not quite right,” Codan chief executive officer Donald McGurk said.

The company was informed by ASIO that malware was uploaded to an employee's laptop once he connected to a hotel wireless network on a visit to China.

Four Corners also claimed BlueScope Steel was compromised by Chinese hackers. The company denied it was hacked but did not comment further.