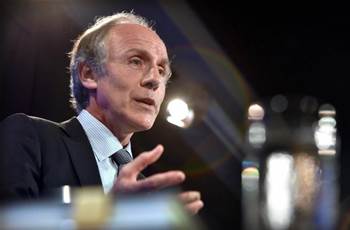 Australia’s chief scientist Dr Alan Finkel has cautioned that companies and corporations cannot just be left to their own devices to come up with individual interpretations for the ethical uses of technology.

Speaking to iTnews on the sidelines of the Human Rights and Technology conference in Sydney on Tuesday, Finkel stressed it will take “enlightened leadership” from global governments to pass legislation that will allow for positive change and protect against the rise “bad actors”.

The vexing issue keeping Australia's top boffin awake at night is the all-too-real potential for the rise of a "new parallel society" - that is, a dystopian separation between those creating and controlling how technology thrust onto humans... and those who are made to to live with its consequences.

At the heart of Finkel's concern is whether artificial intelligence is going to create a “new, parallel society” as rapidly evolving technologies pose challenges “we’ve never had to tackle before”.

The term parallel society has traditionally been used in reference to communities that co-exist and participate within a nation or population but are otherwise disparate from the mainstream due to exclusion or deliberate separation.

But research leaders and experts, like Finkel, are now increasingly using it in the context of those empowered or disempowered by technology related developments.

In brutal terms it boils down to who gets a say in telling machines how to think for us.

The Chief Scientist argues it's now time for humans to step-up and question where innovation is taking us to help society guide its outcomes. He said Australian governments, businesses and citizens also must ask what kind of society we want to be.

Platforms and cloud giants should not be immune from questions, critical analysis and accountability.

While Finkel praised the approaches of companies like Google and Salesforce (who also spoke at the conference) for their “enlightened corporate approaches” he warned vendors alone can't be left to run the ethics show.

The first challenge to overcome, Finkel said, will be to agree as an Australian community what boundaries need to be established and protected by legislation.

“Legislating will also be very difficult because this is pervasive technology.

“You can’t just say ‘no, don’t do that’ because you can work closely with Australian companies and Australian branches of international countries, but we’re living in a connected world.”

International agreements aside, Finkel added that whatever agreements are struck will only help protect us from those who want to play ball.

“We’ll have to work out how to prevent the intrusions of the so-called ‘bad actors’ in this space,” he said.

Difficulties are there to overcome

People shouldn't be deterred by complexity. Finkel said that while balancing innovation and its risks was a “very, very difficult path”, but that “Australian governments have shown the ability to do that in the case of IVF”.

The Assisted Conception Data Collection was an initiative created by the federal government in 1979 to bring together clinical data on trials with in vitro fertilisation, a process which had only resulted in a successful pregnancy for the first time two years previously.

“It took years, almost a decade, really, to get from the first human intervention to the national reporting register. That was a first in the world done in Australia,” said Finkel.

The national register allowed those clinics to access data from their colleagues to so they could collaborate and innovate as a community.

However, the government taking the lead is “probably something we’re going to have to do faster this time around because we’re seeing a technology that touches all of us and can’t be avoided,” he added.

Human rights commissioner Edward Santow agreed with Dr Finkel, adding that the rise of technologies like AI is an "extraordinary step change” with few other historical examples to which it can easily be compared.

“We are as excited as everybody else about the extraordinary opportunities that new technology presents,” said Santow.

“But what we’re saying is that we need to be more deliberate at ensuring that human rights protections are put in place."

He said this is the end goal of the Human Rights Commission’s push to better integrate ethics and technology, which was officially launched on Tuesday.