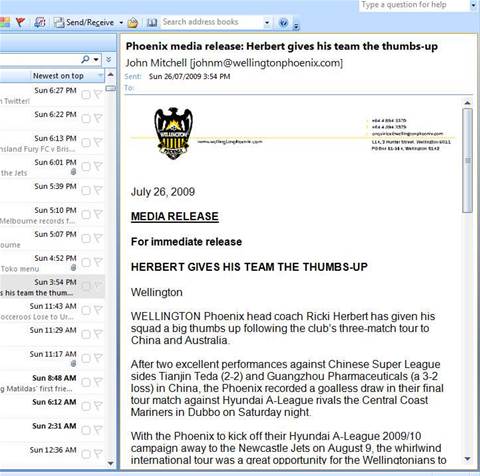 As expected Palm has unveiled a new smartphone and operating system that it believes outperforms every other smartphone on the market.

The Palm Pre is the company's first model, a touchscreen device running a new operating system, Palm Web OS, that was developed along open standards. The Pre has 8GB of storage, GPS, Wi-Fi and EvDO 3G support, a 3 megapixel camera with flash, a 3.1 inch screen and a slide out keyboard.

“The Pre device is set apart from the competition,” said Ed Colligan, president and chief executive of Palm.

“We think it's a perfectly balanced system. It's not just for work, not just for play, we think it is the one phone you will need for the rest of your life.”

The device is built around the concept of internet synergy. Users can link the device into Gmail, Facebook, Yahoo and other email, calender and IM accounts and display all of them on a single screen.

However the information is not displayed on windows as such, but on pages that are scrolled through and shut down by flicking them off the top of the page.

“This isn't a computer desktop, with lots of windows cluttering up the screen,” said Matias Duarte, director of human interface and user experience at Palm.

“Instead it's like a deck of cards. You shuffle through them, reorder them and then throw them away.”

The Pre is unique in the smartphone world in that it is powered without wires. It comes with the Palm touchstone, a magnetised platform that powers the device sitting on top of it by induction.

Colligan couldn't resist taking a few jabs at the opposition in the market, particularly Apple's iPhone. He said that the Pre would have a removable battery “due to popular demand” and made frequent references to other smartphones that locked users “behind walls.”

He continued that the new Palm OS was totally open and all the applications w ere developed in CSS, HTML or JavaScript. Pandora has already created an application for the device and Colligan said that it had taken them three days, compared to months for other smartphone platforms.

“We're expecting developers to produce applications for the phone very quickly,” he said.

“There's no new code to learn, no books to read and if you can develop in these languages you are ready to go.”

The company has already formed partnerships with Facebook, Google, Yahoo, Fandango, Amazon and others to port their information to the handset.

The phone will be released in the first half of the year, and Colligan said that they were working flat out to get it out sooner rather than later. Price was not specified.

The phone will be sold exclusively through Sprint in the United States and a version running 3G suitable for European and world markets is in the pipeline, although again no timeline was given.

The Pre was well received during the press conference, with journalists displaying increasing enthusiasm for the device.

The Pre has been seen by many as the company's last chance to stay in business. It is currently fourth in the smartphone market and has been beset by financial troubles and layoffs.
Got a news tip for our journalists? Share it with us anonymously here.
Copyright ©v3.co.uk
Tags:
device hardware palm pre smartphone