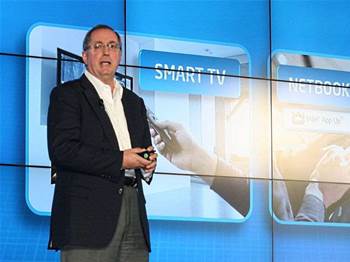 Intel CEO Paul Otellini has officially unveiled the Sandy Bridge processor, boasting that its graphics performance will outstrip up to half of the discrete graphics cards on the market.

Sandy Bridge, which combines both a GPU and up to four CPU cores on a single processor, has already displayed impressive performance in PC Pro's benchmarks.

During a press conference here at CES in Las Vegas, Intel CEO Paul Otellini claimed it was the most significant processor launch since he joined the company in 1974.

"I've personally been involved with every processor launch since the 286," Otellini said. "This is the best product we've ever launched. This is a huge, huge product."

Intel ran several on-stage demonstrations of Sandy Bridge's graphical and processing prowess. The company demonstrated how a Core i7 Sandy Bridge chip was almost twice as fast at applying a filter to a digital photo in Adobe Lightroom than last year's first-generation Core i7.

Intel vice president Mooly Eden also demonstrated how a new Core i7 laptop could transcode a video clip at 345 frames per second - twice as fast as a first-generation Core i7 desktop system with an (unnamed) discrete graphics card.

"The [Sandy Bridge] processor graphics are going to outperform 40 to 50 percent of discrete graphics cards on the market," he added.

Eden was keen to stress that Sandy Bridge didn't only excel in graphics performance.

"If you compare Sandy Bridge to a Core 2 Duo [from three years ago], it's 800% faster when you do an Excel spreadsheet [benchmark]," he claimed. "I believe this is something phenomenal."

Got a news tip for our journalists? Share it with us anonymously here.
Copyright © Alphr, Dennis Publishing
Tags:
bridgecescpufaster than half of graphics cardsgpuhardwaresandy