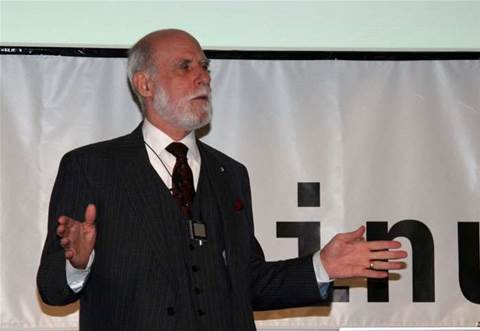 Internet luminary Vint Cerf has urged the Internet community to speed up its move to IPv6 during his keynote speech to the Linux.conf.au conference, also using the opportunity to cast doubt over the Australian government's controversial plans to censor the Internet.

Cerf, one of the key designers of the Internet's architecture, predicted that the long-anticipated exhaustion of the 32-bit address space available in the currently used IPv4 system was imminent.

"We're almost out of IPv4 address space. I'm a little embarrassed about that, because I'm the guy who decided 32-bit was enough. My only defence is that choice was made in 1977. I thought it was an experiment," he told attendees.

While efforts have been underway to shift users and devices to IPv6, Cerf said they are not progressing quickly enough.

"I think you're likely to hear an announcement from IANA that we're out of address space very soon. We need to work very hard to get IPv6 up and running. The time for talking about it is over. If you're not doing IPv6, you should be."

Cerf was also dismissive of plans to try and censor Internet content.

"That doesn't sound like it's a very effective thing to do. There are things we might agree on a societal basis we want to remove from the net, [but] the best we can do is remove it when we find it. We can't stop people putting it up ahead of time."

Cerf also compared the current state of cloud computing to the Internet in 1973, saying that there is a lack of standards available to ensure data could move between different cloud providers.

"None of the vocabulary that has grown up around the Internet has been developed for clouds yet," he said.