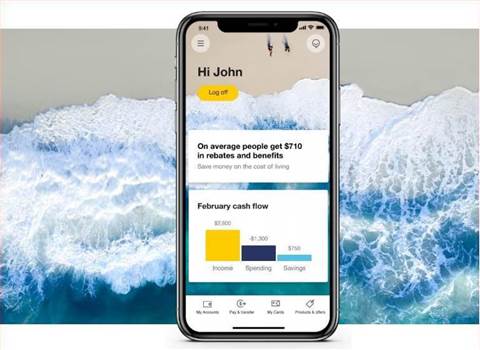 As digitisation push rakes in savings from branches, process efficiencies.

CBA has doubled down on its formidable tech stack and internal application development capability to land a bullish $4.47 billion cash profit for the first half, propelled in large part by operational savings and efficiencies stemming from digitisation.

The profit figure, handsomely above market expectations, comes on the back of a solid 9 percent increase in information services technology expenses for the half year ended 31 December 2019, a hike sheeted back to rises in software licensing, infrastructure costs and good old amortisation.

Net profit is down 4.3 percent, but that's not as much as the market was expecting after the AUSTRAC hit, bloated compliance spend and customer refunds and remediations.

With CBA chief executive Matt Comyn having previously pushed the line that the CBA spends across and through the annual financial cycle – software-as-a-service will be helping that – the bank is now on track to have an its annual tech hitting the $2 billion a year mark.

The head and shoulders of the CBA’s big tech push is its digital offering to consumers, via its app and online presence that underwent a major makeover and relaunch last year.

Notably, the CBA is claiming strong leadership in the digital space – essentially user experience and app functionality – and is claiming not just the number one position for its app based on a net promoter score of 36.2, but a 10 point lead over its nearest rival and an up to 16 point lead over one big four bank. 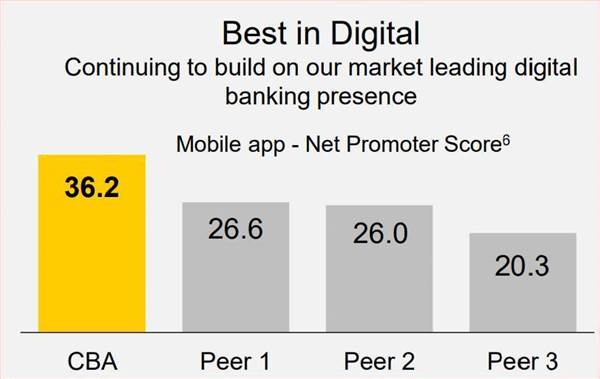 Those numbers will make analysts and investors at other banks wince because they suggest that the CBA, under recently appointed CEO Comyn, will use the full force of its now 10 year-old real time core, customer experience engine and CRM CommSee to dominate the Australian oligopoly.

A major issue in the forthcoming open banking regime, or consumer data right, is that customers will vote with their feet based on value and quality of service.

What the CBA now seems to be demonstrating is that a superior, integrated and intuitive app that leverages a well-integrated and maintained infrastructure beneath it may actually have more influence over consumers when interest rates are at rock bottom.

CBA’s tale of the tape shows that the size of the tech spend is delivering sizeable savings for its business lines, even if the bank is not calling them out.

Better apps mean fewer, smaller branches, fewer branch staff and all the physical overheads that go with them.

“Occupancy and equipment expenses decreased by $24 million or 4 percent, primarily due to the closure of 30 branches in the 6 months to 31 December 2019, partly offset by annual rental reviews,” CBA’s accounts said.

That equates to the CBA shutting more than one branch a week.

The best word to describe the CBA’s tech execution and spend is consistent.

Total information technology services for the half year landed at $1.233 billion, with application maintenance and development carving out $355 million of that figure, though that was down from $383 million from the immediate past half.

Notes attached to the figures suggest the hit stems largely from accounting methodology, because that big number “includes approximately $220 million one-off impact of accelerated amortisation following a review of the amortisation method and the useful lives of certain technology assets.”

There was also a spate of Kondo-mania in the software department, with a conspicuous de-junking propelling software amortisation to $568 million for the half year, well up from $288 million in the immediate past half and $310 million from the previous corresponding period.

Desktop costs have fallen steadily landing at $49 million, down $73 million for the previous corresponding period.