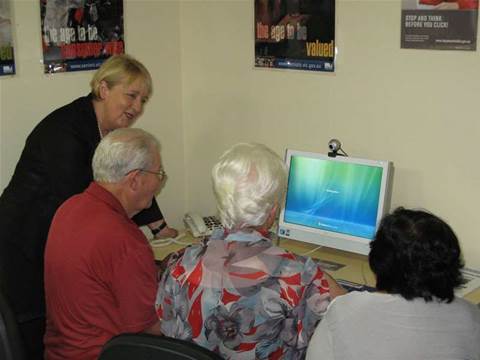 The Government celebrates 2000 kiosks amongst calls for more funding.

The Federal Government has celebrated the wiring of the 2000th and final kiosk in its $15 million Broadband for Seniors program.

The kiosks – which are essentially pairs of PCs fitted with webcams and broadband access, have been “fabulous” for seniors, according to Nan Bosler, president of the Australian Seniors Computer Clubs Association, one of several organisations in a consortium behind the project.

Funding for the 2000 kiosks runs out in June 2011, and there does not appear to be any plans to extend the program.

Bosler told iTnews she was hoping for a funding extension. "Without funding, I'll probably be down at least one staff member," she said.

David Cooke, group manager at NEC Australia, the company that led the consortium, said the installed equipment becomes the property of the participating sites (senior citizens centres)  at the end of June 2011, after which time the recipients would need to arrange their own hardware and software support, as well as pay for their own broadband access.

At present, half the sites are connected via NEC’s Nextep division, the rest using government-subsidised access via deals with participating internet service providers.

Since the project launched, more than 94,000 face-to-face training sessions have been delivered, plus more than 40,000 online lessons.

The most popular courses have been introductions to computers, word processing, the Internet, and email, but "a lot of people quickly went beyond that" and began applying the technology to hobbies and interests such as genealogy, Cooke said.

There has been a significant increase in Internet usage by over 55s  in recent years. Ten years ago only 7 percent used the net, but the figure has risen to over 50 percent.

Cooke and Bosler nonetheless felt that there is still a need for training seniors.

"If we can help [fellow seniors] to use modern technology, it opens the world to them,” Bosler said.