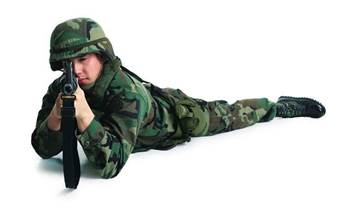 The University of Portsmouth has developed a thermal vest to keep body temperatures down after the death of a British soldier in Iraq due to heatstroke.

The vests use better airflow, lines of water and reservoirs of paraffin wax that absorb heat and dissipate it away from the body.

An undisclosed US-based military contractor will make the vests, which will become available within the next two years.

"The cooling power generated by these garments will make a difference for soldiers operating in extreme climates such as those in Iraq," said Mark Newton, a thermal physiology scientist at the University of Portsmouth.

"Heat-illness can be very severe and can kill people. We know that decision making is impaired as core temperature is elevated.

"This kind of technology and its application is really about how best to utilise and maintain manpower, so that people can perform better and over a longer period of time than might otherwise be the case given certain extremes of climate."

Private Jason Smith, a member of the Territorial Army, died in Al Amarrah in August 2003 after his body temperature soared to 41.1C. At the inquest the court was told that rehydration packs were unavailable at the time of his death.
Got a news tip for our journalists? Share it with us anonymously here.
Copyright ©v3.co.uk
Tags:
battlefieldbritishcoolhardwareonsoldiersstaythe