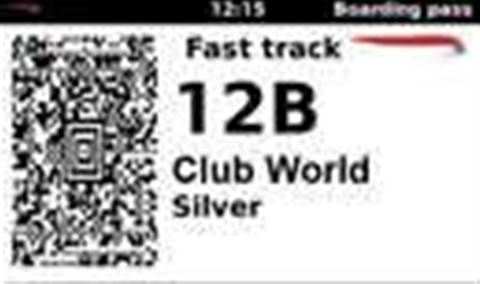 British Airways has extended a paperless boarding pass scheme used in the UK and parts of Europe to Android and BlackBerry phone users.

The airline claimed 30,000 passengers had used mobile boarding passes since BA launched the service in mid-July.

The system replaced the need to print a boarding pass before travelling, or to use a kiosk or check-in desk at the airport.

Travellers first needed to download British Airways' app for their chosen smartphone. Then, once they had booked and checked in for a flight, BA sent a boarding pass to the smartphone.

The electronic boarding pass included a bar code, which the passenger then used to clear security and for boarding.

Currently, British Airways was accepting the mobile boarding passes for UK domestic flights, as well as to all short-haul European destinations.

The boarding pass could also be used for the return leg at key European destinations such as Paris, Barcelona, Zurich, Berlin and Amsterdam.

Travellers wanting to use the mobile boarding pass needed to be members of the Executive Club, BA's frequent flyer scheme.

However, some airlines relied on SMS links for downloading the passes, instead of using a dedicated smartphone app.

The app "gives our customers increased control and makes travelling on British Airways even easier and smoother," said Chris Davies, BA's head of digital marketing. BA claims that more than a quarter of a million customers have downloaded its smartphone apps across the three mobile platforms since launch.

BA has created a webpage with details on how to download the app, including information for Blackberry Enterprise Server users.