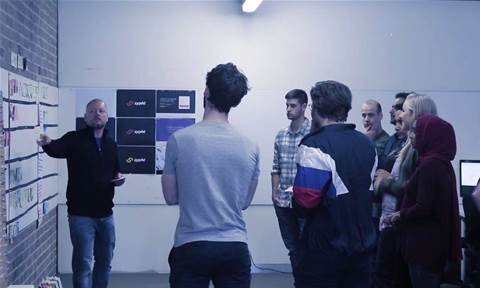 Payments juggernaut BPAY has revealed an ambitious expansion plan that, if successful, will position it as a financial technology services and software powerhouse.

It’s a potentially massive play that spans across business and consumer sectors through a series of apps and value added services.

The bank-backed service, which presents and shunts the bulk of Australia’s bills online, on Wednesday lifted the covers on its two latest wholly-owned spin-up ventures.

It’s betting big they will catapult it from being Australia’s biggest online money pump to a full smart services and software supplier.

The extent of what’s in play is best illustrated by the tale of BPAY’s tape.

According to BPAY’s latest statistics, the aggregator now churns through 1.6 million payments worth around $1.8 billion every day – or transactional flows of $650 billion a year.

Paradoxically its headcount is just 120 people, a size it says small enough to be nimble but big enough “to make a difference”.

Behind those niceties, BPAY does transactional scale, efficiency and usability at an otherwise unseen level in Australia – not bad considering it started out as a low cost bulwark by banks to head off credit cards getting a monopoly by default on online payments.

Now it’s out to reshape the payments game again.

The first two ventures out of BPAY Group’s gate will target self-managed property investors and data extraction and exploitation for businesses respectively. Both will be independently run and have their own chief executives and teams.

BPAY chief executive John Banfield said on Wednesday that the decision to focus first on those sectors came after an internal bake-off for ideas to transform the 20 year-old business from a low cost payments provider into a developer of technology and innovation in its own right.

Having restructured as BPAY Group in 2017 amid the rollout of the New Payments Platform, the business has been concurrently on a highly focused diversification push to build out new business lines after bringing in BCG Ventures to internally advise and road-test market opportunities.

It’s understood that some of the hired help also decided to up stumps from BCG Ventures to back the new business lines that are ostensibly start-ups – but in reality the sharp-end of retail bank-backed smarts that can traverse the sometimes internecine rivalry between institutions.

On the data side, BPAY is plugging “Sypht” as a new SaaS venture that will use machine vision, machine learning, natural language processing and AI to pull apart and reconstitute the largely unstructured data in bills and invoices issued to businesses.

At a core technology level, the proposition might not seem like much of a leap forward compared to other analytics plays that are becoming increasingly commoditised. But that’s not really its killer edge.

With BPAY having essentially pioneered, transformed and cornered Australia’s bill presentation market – that’s where billers like Telstra save money by sending their demands to your BPAY account – Sypht’s data backyard is arguably Australia’s biggest data lake of receivables.

Put more bluntly it’s pulling real data that can be used in anger out of bills and statements that many billers (perhaps deliberately) keep in formats that makes extraction painful.

“It’s also difficult to share these insights efficiently across the business and in a lot of cases the value of the data is inaccessible and never used,” Billington said.

Don’t be fooled by the understated vanilla tech sell.

With BPAY running the billing pumps, what’s really going into play is a value added service that will essentially create a middleware layer to consensually slice and dice data to help customers, especially smaller businesses, negotiate a better deal on everything from phones to banking and credit card accounts.

If effective, and there aren’t too many reasons why it shouldn’t be, it could effectively create a lowest cost monetization of the business of contestability and account portability. The permutations aren’t hard to imagine or speculate on… consumers don’t pay, but banks billers do.

It could just shift momentum from clipping the ticket to flipping the ticket, an area of intense policy scrutiny at the moment. Just imagine: a mobile phone bill, plan or bundle you could actually understand …

If Sypht is BPAY Group’s dark horse of data, Lodge - its new property play - would be My Little Pony.  For those Australians who can afford it, owning an investment property is where it’s at in terms of wealth creation and preservation.

Just don’t ask them what they think about real estate agents, especially the kind that ostensibly ‘manage’ properties for a clip of around six to seven percent of the rent book for services both landlords and tenants increasingly question the value of.

At a superficial level, albeit highly compelling, Lodge disintermediates the cornucopia of half-baked real estate management apps developed as bait by agency franchisees who make far more on flipping commissions to keep potential sellers on their books.

The cut through, BPAY hopes, will be that self-managed landlords will switch for the benefit of simplicity and transparency, the latter being code for less aggravation from the Australian Taxation Office.

Given that BPAY weaves together payments to and from everyday bank accounts, there’s some logic to that. When payments and expenses become visible and more simple at a single account level, the bet is that trust increases on both sides.

Lodge’s chief executive Justin Jefferies told iTnews a key feature of Lodge is that it “simplifies tax by generating tax reports that can be sent to your accountant in an easy to use online platform.”

The advertised price point for that is a flat $20 per month, a price that easily undercuts the statement fees charged by most property managers. Banks, presumably, win too because there’s better visibility of the overall rental market.

According to Jeffries, who previously held senior executive roles at Knight Frank and CBRE, things are just getting started. Over the next month maintenance and tenant vetting features will be added, with a tenant portal, tax advice and bond management also coming within months.

But the real appeal is that the features will be linked to landlord bank accounts, reducing the flicking to and from different accounts.

Given the advent of positive credit reporting, and where Lodge says it’s going with tenant vetting, a little more transparency may not be such a bad thing, especially given the appalling history of tenancy blacklists.

How social equity issues might be resolved is another question entirely.