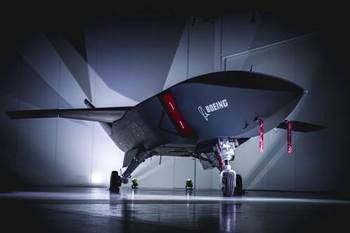 The world's civil aviation fleet might for the most part still be grounded, but in the defence sector Australian designed and made aircraft have started rolling-off the production for the first time in two generations.

Aerospace engineering heavyweight Boeing on Tuesday showed off the first unmanned Loyal Wingman aircraft, which it says is the first craft to be designed, engineered and manufactured in Australia in over 50 years.

The drone was presented to the Royal Australian Air Force on Tuesday, and is the first of three prototypes for the country’s Long Wingman Advanced Development Program.

As the basis for Boeing’s Airpower Teaming Systems, it uses artificial intelligence to build on the capabilities of both manned and unmanned aircraft by autonomously flying alongside them and conducting teaming missions.

Kristin Robertson, vice president and general manager of Autonomous Systems for Boeing Defense, Space & Security, described the Loyal Wingman as a “force multiplier”, however, the aircraft is yet to undergo in-flight testing with the Air Force.

“We look forward to getting the aircraft into flight testing and proving out the unmanned teaming concept,” she said.

Prime Minister Scott Morrison said the development of the aircraft is a “truly historic moment” for Australia and its defence innovation.

“The Loyal Wingman will be pivotal to exploring the critical capabilities our Air Force needs to protect our nation and its allies into the future.”

“This demonstrates the importance of the relationship Air Force has with Boeing Australia and defence industry more broadly. I look forward to exploring the capabilities this aircraft may bring to our existing fleet in the future.”

The release of the Loyal Wingman comes less than a week after Boeing Australia began redundancy processes across its Australian and New Zealand operations, with around 230 positions to be lost from the Boeing Aerostructures Australia facility.

However, in a statement the company said Boeing Defence Australia (BDA) and Insitu Pacific would not be impacted by the current redundancy process, and BDA will continue to grow its defence systems and services portfolio with plans to fill approximately 170 open positions.
Boeing Australia currently employs more than 4,000 people across its broad aerospace portfolio.

The development of the prototype was backed by a $40 million investment from the federal government, and represents Boeing’s largest investment in an unmanned aircraft outside of the US.