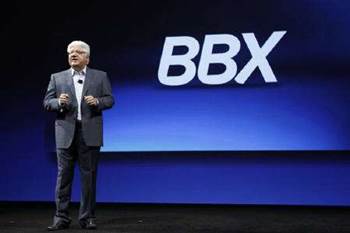 BBX, the operating system that Research In Motion is counting on to revive its floundering BlackBerry franchise, has run into trouble even before the company could install the system in its smartphone line.

A New Mexico firm claims the "BBX" name is protected by trademarks it holds and is threatening to take legal action against RIM unless it stops using the moniker.

The firm, Abuquerque-based Basis International, said it had already trademarked the "BBx" name for its own software language, database and toolset.

"Our patent attorney has sent them a cease and desist letter, invoking the US trademark act ... requesting a response by Oct. 31," Basis Chief Executive Nico Spence told Reuters on Thursday.

"Failing that, we'll take the next logical legal step."

While legal action may never materialise, the threat may prove yet another embarrassment for a company that has suffered its fair share of them recently.

The latest was a three-day global outage of BlackBerry service, which followed a series of profit warnings and botched product rollouts.

On top of that, its management has been scolded for what its critics say is an arrogant and insular style.

Earlier this week, RIM announced the new BBX platform for its next-generation devices at a developers conference in San Francisco. It provided no timetable for the rollout, however.

"RIM has not yet received a copy of the legal complaint described in Basis International's press release, but we do not believe the marks are confusing, particularly since our respective companies are in different lines of business," the Waterloo, Ontario-based company told Reuters by email.

Basis, founded in 1985, operates on five continents but is focused mainly on the US and Latin American markets.

The firm said it has thousands of product licenses installed worldwide with the "BBx" prefix that run on Windows, Linux and Mac operating systems, among others.

"We are fielding numerous customer inquiries voicing their confusion about the RIM announcement," Spence said.

RIM's BBX would replace the antiquated software that now powers the BlackBerry with a package built around the QNX system, already the engine behind the PlayBook.

RIM wants to reverse a growing consumer preference for faster and more intuitive devices by Apple and devices powered by Google's Android.

The San Francisco conference was the first public stage for the Canadian company since last week's global disruption of BlackBerry service, which added to a series of setbacks for RIM over the past year.

Law firms in the United States and Canada are exploring possible consumer lawsuits against RIM for the BlackBerry outages, which crippled email and messaging for tens of millions of users around the world.