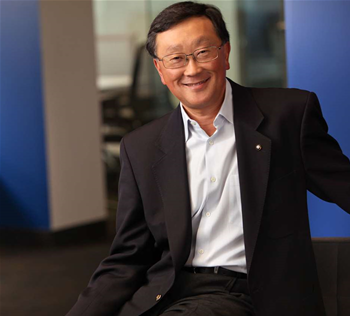 BlackBerry has concluded a protracted and painful restructuring process and is back on a growth footing, according to an internal memo to all its employees.

"We have completed the restructuring notification process, and the workforce reduction that began three years ago is now behind us," the memo from BlackBerry CEO John Chen read.

"More importantly, barring any unexpected downturns in the market, we will be adding headcount in certain areas such as product development, sales and customer service, beginning in modest numbers."

BlackBerry has shrunk its workforce by roughly 60 percent over the last three years as it attempts to reinvent itself to compete in the tough smartphone market.

Chen, who took the reins at BlackBerry roughly eight months ago, has moved rapidly to stabilise the company by selling non-core assets, partnering to make the company's manufacturing and supply chain more efficient, and raising cash via the sale of the company's extensive real estate holdings in its hometown of Waterloo, Ontario.

Chen, a well-regarded turnaround artist in the tech sector, intends to remain a competitor in the smartphone arena, but is focused on reshaping the company to build on its core strengths in areas like mobile data security and mobile device management.

In the memo, Chen told employees he believed BlackBerry was now well on its way to recovery, and he was confident it would meet its goal of being cash flow positive by the end of the current fiscal year.

He noted also BlackBerry, which had previously said it was trimming its workforce down to 7000 from a peak of over 17,500 in 2011, was now in a position to make strategic acquisitions to strengthen areas that are likely to drive future revenue growth.

Last week, BlackBerry announced one such deal with a move to acquire Secusmart, a privately-held German firm specialising in voice and data encryption. The deal is expected to burnish its credentials with some of its highly security-conscious clients like government ‎agencies.

Chen stressed there was "no margin for error to complete BlackBerry's turnaround to success", and he called on employees to remain focused as the company rolls out an upgrade to its device management system and its new Passport and Classic devices.