BHP digging for software to shift bottlenecks in its coal mines 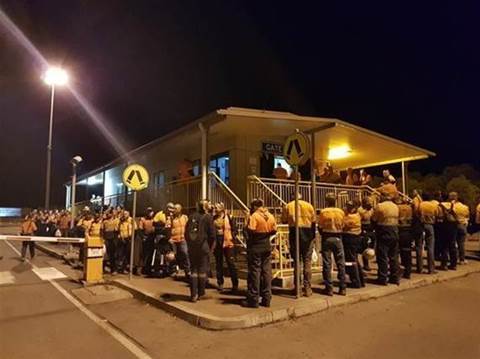 Miners at an undisclosed Queensland coal mine queue for access. (Credit: BHP/Unearthed)

Caused by slow and separate systems.

The big Australian miner says it's currently taking too long to dial into multiple data sources and systems that are needed “to indicate if a person should or should not be able to access site when they swipe their card at a gate.”

The push comes amid ongoing focus to make mines safe, efficient and productive by minimising downtime, delays and unscheduled stoppages.

That means latency in system access and communications is coming under increased scrutiny when large numbers of miners are on the move in the same way that mass transit gates have to operate quickly to prevent commuter queues forming.

In the case of BHP's bottlenecks, the underlying causes are believed to be a lack of integration between systems that hold compliance and personnel files, and bandwidth constraints at gated mine entrances that make it slow to run background system checks.

Ben James, a business partner in BHP’s Technology organisation, said that major delays that might stop hundreds of workers from starting a shift on time were becoming less frequent but remained a concern.

“There was absolutely a period there where it was happening every week. Now I would suggest it’s probably every couple of months, maybe a little bit less,” James said.

However, an individual or handful of individuals could still find themselves caught up at a gate, with no easy resolution in sight.

“It’s not unusual to say to some people, ‘see you tomorrow’,” James said.

In response, BHP is hoping to find companies that can help it overhaul site access control for mines.

It is almost at the end of an initial competition run by the resources-focused crowdsourcing site, Unearthed, which is increasingly used by large miners to source ideas from external data scientists, developers and start-ups.

BHP’s approach is slightly different in that it is using Unearthed to produce a shortlist of creators that it will then meet with privately in the hope of finding solutions it can co-develop and pilot at its mine sites.

Most challenges that run on Unearthed are competitions with set amounts of prize money on offer.

In a webinar associated with BHP’s challenge, the miner said it had been trying to tackle the site access problem itself, with mixed results.

“This [challenge] is not the only thing we’re trying to do here,” James said.

“We have made a lot of incremental changes in the system and architecture to bring stability to it, to try and ensure data flows better.

“At the same time we’ve introduced new systems which complicated the architecture - so two steps forward, one step back.”

BHP runs different forms of site access systems at its mining operations worldwide, though its problems are most acute for its coal mining operations, which are largely centred on 10 mines in Queensland (though it also has a single site near the NSW Hunter Valley).

It isn’t just new employees that might have problems when they arrive at a site and try to swipe entry.

All employees have to stay up-to-date with standard operating procedures (SOPs), health and safety requirements and training for the sites they attend.

“There’s lots of legislative requirements within the Queensland coal industry around people being trained, competent and authorised,” James said.

“That happens on a continual basis so training is in date, then it expires. Typically people do retraining before it expires so that there’s continuity of access.

“The legislative requirements are more rigid in Queensland than anywhere else in the world for a coal mine, but at the end of the day they’re designed to keep people safe and we absolutely need to make sure that we’re adhering to them.”

James said that shift changes were the most critical point in the day to ensure access control runs smoothly.

“A lot of those people are in cars, there’s a lot who are walking so they get bussed in, and they need to all move through turnstiles and boom gates.

“Some of them then get picked up by buses on the other side of the turnstiles and moved through to their start locations where they do pre-starts.”

James showed a series of photos of miners crowded at access control at the start of a shift, unable to authenticate access, as well as long queues of vehicles backing up onto a main highway.

For those that arrive by car, an RFID tag attached to the vehicle also typically needs to be scanned, in addition to the cards of those seated inside, in order to prove everything going onto the site complies with requirements.

Though major incidents were less frequent, the issue is still considered important enough to tackle in order to find a permanent fix.

Work is likely to be undertaken during the next financial year, with James noting there was an undisclosed amount of budget allocated to the effort.

“We currently have a trial scheduled and budgeted for H2 2019, and we are looking for teams and solutions that would be ready to get involved in this trial,” BHP said on the Unearthed site.

James said that shift changes meant that problems, if they arose, impacted workers at 5.30am or 6am.

“These workers are then going to do a 12 hour shift, they go back to camp that night, get up again at 4am, have breakfast at 4.30 and go to site again,” he said.

“They’re not in any mood to be stuck outside a gate for an hour when their supervisor doesn’t know where they are and they’re trying to get in to find out what work they have to do for the day.

“The supervisor needs them in the gate, needs to brief them on safety requirements for the day and give them their jobs so they can go and get some work done.”

James said that while it was possible to exempt workers in order to get them in the gate, it was a decidedly manual process and involved layers upon layers of approvals, given someone was essentially taking on a high amount of risk in order to start work.

There were other ways to manually process staff entry in the event that the access control systems were struggling.

“Realistically we’d get them onto site and get the work done, but it wouldn’t be an efficient way of doing things,” James said.

The miner said it was open to using “different technologies within the solution, such as wearables, sensors and geolocation” services.