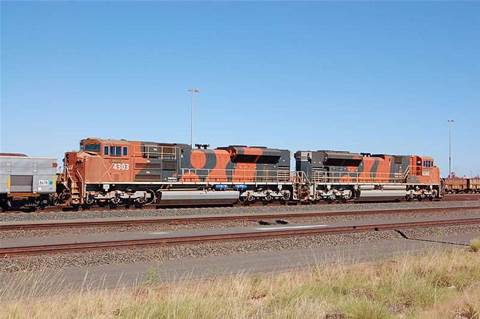 BHP Billiton Iron Ore will use cloud-based software to control and manage business processes at a new automated facility in Western Australia where robots will perform maintenance on the rail cars used to haul ore from pit to port.

The mine giant has chosen to deploy Loc8, developed by a Melbourne firm of the same name, at its forthcoming ore car repair shop at Mooka, a major expansion area for BHPBIO located near Port Hedland.

Mooka will be home to the world's first fully-automated rail maintenance facility. Implementation works are still underway, with go-live for the facility and its advanced systems expected some time this year.

Rail cars will be received by the facility and taken along a production line where 67 robots work to maintain or replace parts like bearings on each car before they are put back into service.

"Loc8 is being used as the layer that underpins everything that goes on in that automated facility," Loc8's chief technology officer Owen Batt told iTnews.

"We're the master system. It's quite the project for us."

Batt said there were potentially 200-plus business rules or process streams that each car would be subjected to at Mooka.

The software would also keep records of which components were put on particular rail cars, and feed that data into BHP Billiton's enterprise resource planning system 1SAP.

According to Batt, the rail cars at Nelson Point pass through a series of "stands" where they are manually disassembled or reassembled. Each stand is home to a "kiosk" that runs Loc8 and is used by its operator to capture maintenance information.

Although BHP's global 1SAP system has its own maintenance capabilities, they did not go to a granular enough level to support the complexity of Mooka's automated shop floor, according to Batt.

"The way in which assets and componentry are reflected inside SAP only goes down five levels, and it's a group policy that it stops there," he said. "That really only gets you down to the ore car [level]."

Loc8 tracked all the components that made up an iron ore car and fed this aggregate data back into 1SAP.

BHPBIO is Loc8's largest mining customer, although it also counts contractors UGL and Lycopodium. Outside of mining, Loc8's other users include Transfield Services and Programmed Maintenance Services.