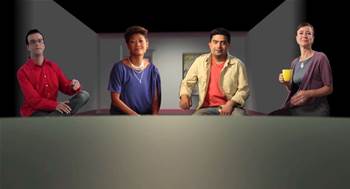 Researchers are working on a low-cost camera and screen that swivels on a set of robotic shoulders, and sits at a meeting table with physical attendees.

Each so-called ‘Nethead’ represents a remote participant, who appears by video on the screen, and can control the direction the robot faces by naturally turning his or her head.

But according to Bell Labs’ residential applications research director Jan Bouwen, there is more to an immersive discussion than sound and video.

Bouwen highlighted the value of a “turn-taking mechanism” that determines who should be next to speak.

In person, two people who begin to speak to a group at the same time tend to take their cues from the direction in which most group members are looking.

Those subtle cues are lost in current videoconferences, Bouwen said.

“It’s almost like gaze direction is a consensus mechanism [that determines] who can continue,” he said.

“Even with high-definition video, you can’t see who in room one is looking at who in room two. That’s a research challenge we’re trying to tackle.

“Someone showing clear agreement or clear disagreement is [also] important. If you’re trying to explain something, knowing who is confused and not following is important.”

Bell Labs chief scientist Alice White noted that Nethead was currently a research project, not a product, but could be commercialised within two years.

It would likely suit meetings that involved only one remote participant, and would cost “hundreds”, not the “tens of thousands of dollars” usually required for high-end telepresence deployments, she said.

“I’m very often in meetings where most people in the meeting are at the table, but one person is on Polycom or something like that,” White said.

“We just tend to forget about that person and that person misses all of the subtle things that go on in the room.

“[Nethead is] there on a stand, and has a picture of that person’s face. It’s turning, just as the person would be turning. They’re impossible to ignore because they’re present.”

Speaking at the University of Technology Sydney last week, Bouwen said the first of its videoconferencing technology could be incorporated in an Alcatel-Lucent product next year.

That technology extracts up to eight people from their real-world backgrounds and makes them appear beside each other in a virtual meeting room.

Because most of the processing work takes place in the network – Alcatel-Lucent’s traditional area of expertise – the software could reach a range of devices, including thin clients and tablets.

Other technology in development in Antwerp and Bell Labs’ headquarters in Murray Hill, New Jersey, targets ad-hoc, hallway discussions that White described as a key part of the organisation’s culture.

In Murray Hill, where White is based, Bell Labs has set up sensors in a meeting room and along a hallway to study the “random conversations” that take place in the office.

“We have a tradition of walking around the building after lunch … that tradition is passed on through stories of important inventions that were written on napkins,” she said.

“We’re tending towards remote working, so we have to figure out how to solve that problem, and in a way, you can’t script it.

“Right now, the ability to work from home is a little dicey – the connection is not something you can depend on and the technology is not particularly great – but I think that all those things are just around the corner.”