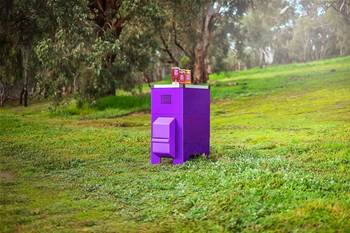 Bega Cheese has launched a network of smart beehives that can automatically detect parasites in a bid to safeguard Australian honey production.

The Purple Hive Project uses 3D printed components to house 360 degree cameras that feed into an artificial intelligence algorithm that is capable of identifying healthy bees from those carrying the deadly varroa destructor mite.

The solar-powered devices immediately send an alert to beekeepers to quarantine the affected hive to contain the spread of the mite, which has devastated bee colonies on every other continent.

An initiative from Bega Cheese’s B Honey brand, the devices can be fixed to existing beehives for round the clock monitoring at high-risk entry points to Australia, saving beekeepers from having to perform manual inspections.

Unchecked infestations of varroa mites can cripple and even kill off entire hives within three to fours years, industry group BeeAware said.

The mites typically feed off bee larvae, weakening them, introducing viruses and causing malformations that disrupt brood patterns or preventing the bees from flying to collect food and cross-pollinate plants.

Beekeeper Millie Enbom-Goad said that as the last continent without the parasite, preventing its entry is one of the biggest challenges for the industry.

“We’re going to have to be working with industry, be working with innovators and entrepreneurs to try and address this as quickly as possible so we can still be a valid part of the industry and still supply honey to Australians,” she said.

Ian Cane, another beekeeper working with the Purple Hive Project, added that early detection will be vital if the varroa mite does find its way to Australia.

“Bees are super important as we know certainly in Australia and all around the world [because of] how effective as pollinators they are,” he said.

“So much of the food we eat today is dependent on those little honey bees pollinating.”

“At Bega, we’re really excited about the Purple Hive Project and we believe this can be the first step in bringing further innovation to the agricultural industry in Australia,” he said.

The namesake purple is inspired by a shade of particularly popular to bees made up of yellow and ultraviolet light which is invisible to human eyes.