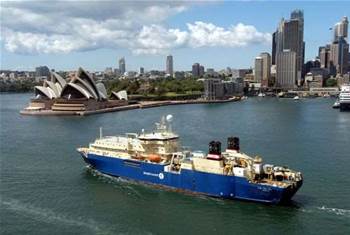 Tassie comms to be disrupted for next two months.

Cable operator Basslink is still searching for a fault on its cable connecting Tasmania with mainland Australia that was first identified last month, but expects it to be repaired on schedule by mid-March.

A fault affecting the high voltage direct current electricity interconnector on the 295 kilometre cable occurred on December 20 last year. It is estimated to be approximately 100 kilometres off Tasmania in the Bass Strait.

Basslink chief executive Malcolm Eccles yesterday said [pdf] the first inspection of the cable using a remotely operated submarine did not reveal where the fault was.

The Alcatel-Lucent-operated cable vessel Ile de Ré has now been dispatched from Auckland with a 80-tonne cable reel frame fitted to its deck to locate the fault.

The ship is currently in the Bass Strait, with 60 people onboard including 13 cable joiners from Italy to find the fault, which is expected to take another four to five days.

One of two remotely controlled submarines will be used to cut the cable so it can be lifted up for repairs - the cable itself weighs 60 kilogram per metre and "lifting this weight at sea poses a range of challenges," Basslink said.

Cutting the cable will take the fibre optic telecommunications cable out of service until the entire circuit has been repaired, Eccles said.

Basslink expects the cable to be cut and the fault analysed in early February. Repairs are still expected to be completed, putting Basslink back in service, by March 19, Eccles said.

He said telcos and internet providers on Basslink "have contingencies in place, or are in the process of finalising these contingencies," but did not specify what these were.

Telstra operates two cables between Tasmania and the mainland, Bass Strait 1 and 2, which became operational in 1995 and 2003.

Subpartners is in the midst of laying the APX-Central cable, which spans 4800 kilometres from Perth to Sydney with spurs to Adelaide, Melbourne and Hobart. The cable is expected to be ready for service in the third quarter of this year.

Shadow treasurer Scott Bacon told the ABC the fibre-optic cable outage would affect somewhere in the region of 50 percent of Tasmanian telco customers for the next six weeks.

Telecommunications services on Basslink were last severed in March 2014, after vandals damaged a fibre-optic cable at Traralgon South, Victoria.