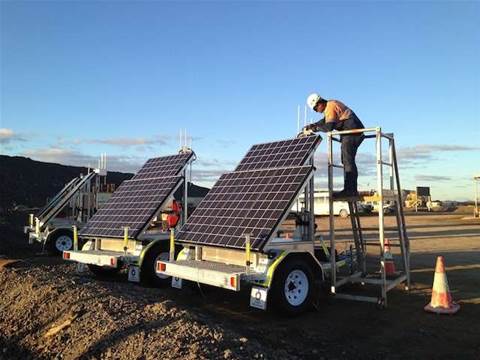 Bridges gap between production and IT.

Barrick Gold has rolled out a wireless mesh network at its NSW-based Cowal mine with the aid of an innovative Australian-developed solar-powered trailer.

The Canadian gold giant is one of at least four mining firms to adopt the solar mobility trailers which are designed and manufactured by Brisbane's CBO Telecommunications.

The ruggedised trailers carry a solar panel and ﻿can house a range of network equipment, such as wifi, mesh or microwave links. They are designed to act as portable network extensions at remote sites.

CBO's managing director Mark McGregor told iTnews that Xstrata, Peabody Energy, Newcrest and Barrick Gold had bought trailers in the past 18 months, and that the company is shortlisted for several multi-million dollar contracts.

McGregor said the Barrick project came about as part of an upgrade of the Cowal's MineStar fleet management system approximately two years ago.

According to a Cisco case study (pdf), Barrick decided to upgrade the communications network that underpins MineStar-enabled operations at Cowal, in part to take advantage of features in the upgraded fleet software.

"Cisco had never envisaged putting these things on trailers and having them move around [a site] — what they actually envisaged was putting them on a light pole at a remote part of a university campus [for example]," McGregor said.

"We've had to work very closely with Cisco ... to make sure that we're meeting or exceeding their requirements, but also making sure that the business requirements of the customer are met."

The idea of hosting the access points on trailers is that edge connectivity can be moved dynamically and cost-effectively to the parts of the mine where it is needed most.

"it dramatically extends your coverage across the mine tenement," McGregor said.

"Our mobile wireless network can change from week to week as the topology and depth of the mine changes," he added in a statement, saying the system had proven capable of relaying communications "at a pit depth of over 400m with no connectivity degradation or packet loss".

The Cowal mine has a core network consisting of fibre optic cabling and high-capacity microwave links that connect "via mesh to [the] mobile access point on the trailer", McGregor said.

Barrick is but the latest miner to take a refreshed view of the way communications networks are deployed on mine sites.

Rather than deploying standalone networks for specific applications, as has been the case in the past, many miners were now looking to deploy a single communications network for multiple applications.

It is also "able to support ... video surveillance cameras that monitor suspicious activity within the mine, ... secure voice communications ... [and] headset monitors that can alert the control room if a driver becomes tired and starts nodding off".

"One of the things that we've been instrumental in the last couple of years is working with our clients to make sure they get their best bang for their buck," he said.

"[Barrick] is number six or seven for us in the last 18 months saying ... 'We don't have budget to go and do five things [that are] similar, so let's do one thing.'"

While the mesh network supports multiple applications, those that run over it could still be classified broadly as operations or production systems.

In other words, there appears to be little appetite among miners to run production and IT systems such as email or internet over the same communications network.

"We need to be very clear — this [mesh network] doesn't have ... standard IT [traffic] on it," McGregor said.

However, McGregor noted that Barrick IT did play a role in the network specification and design, a sign that the traditional divide between IT and mine operations personnel is slowly being broken down.

"Barrick are, like the rest of our customers, really saying, 'What is the line between production and IT?'" McGregor said.

"Now what happens is exactly [as it is] in this case — Production went and bought a network but they bought it and used internal IT as a consultant helping them specify it. This is the paradigm shift."