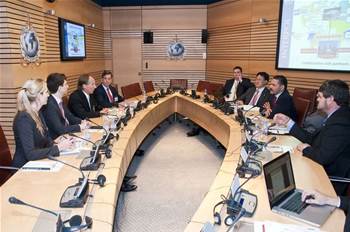 Three of the four major Australian banks have submitted applications to own and operate new top-level domains in a bid to boost branding and create custom website names.

National Australia Bank, Commonwealth Bank and ANZ have joined a group of 32 Australian organisations hoping to host some 40 new generic top-level domains (gTLD), making up a small fraction of the total 1930 applications received globally by international domain registry ICANN to the end of May.

The gTLD program allows organisations and governments to own and operate their own 'slice' of the internet, replacing traditional .com, .org or .net domain names for custom domains such as .brand.

The international body predicted the process could add "up to" 1000 new top-level domains to the DNS system, which currently has only 22 of its type.

The world's largest companies have applied for their own domains including Samsung, Apple and Microsoft, with Amazon alone applying for 77 new top-level domains in a mix of Latin, Chinese and Japanese characters.

Australian organisations have largely remained secretive about their participation in the expensive program, which requires $185,000 to apply and potentially millions annually for ongoing operation if successful.

Those that did willingly publicise their efforts include iiNet, the Australian Football League and a joint effort by the NSW and Victorian Governments to operate domain names for each of Sydney and Melbourne.

However, any remaining secrecy was blown away when ICANN revealed the public list of all applications (full list) received at an event held in London this week, complete with the email address details of the individual applicant for each company.

The reveal confirms swirling rumours of participation by the banks in the program. None of the four banks contacted by iTnews ahead of the reveal this week agreed to comment or confirm the rumours.

A Commonwealth Bank spokeswoman told iTnews after the reveal that the bank was "excited to achieve this first milestone and look forward to the upcoming ICANN approval process".

A NAB spokesman said the bank had moved to secure the domains as a potential option for future online considerations. However, he noted that the current nab.com.au domain – which garnered 200 million visits last year – was already deeply integrated with the brand and any moves away from the domain would occur "well into the future".

Other financial institution applicants included AMP and iSelect, the latter of which applied to operate three top-level domains.

Educational institutions also made a strong showing in the push for custom domains, with LaTrobe University, Monash University, Bond University and Open Universities Australia all submitting applications for their own names plus a number of other customer domains.

Though Telstra told iTnews in recent months that it was not interested in procuring its own top-level domain, the application list reveals it did apply to register a .yellowpages gTLD for its ailing classifieds business.

The event marks the end of applications and the beginning of an assessment period for each of the 1930 domain hopefuls.

ICANN senior vice-president of stakeholder relations Kurt Pritz told media in London that initial evaluations for the top-level domains would be completed and made publicly available by January next year, with the first of the new top-level domains potentially going live by the middle of 2013.

The body had gathered a total $352 million from the application fees, though organisations still have a chance to apply for partial refunds up until the end of processing.

ICANN chief executive Rod Beckstrom defended the $185,000 individual application fee as a "break even" cost for determining the eligibility and potential risk of each application, which included a $65,000 risk contingency for each applicant.

In order to qualify to host a top-level domain, the organisations must prove their domain name does not infringe the copyright or interests of competing parties, or pose danger to the global DNS system.

They must also be technically capable of operating the system, often through a third party registrar or host.

Where two or more applications propose to operate the same top-level domain, ICANN's Pritz said the body would prefer community or joint applications, putting Australian applicants Tennis Australia and CPA Australia ahead of rivals in their bids to attain domains.

Applications will be open to a 60-day comment period between duplicate applicants as well as a seven-month period in which others can object to an application.

Beckstrom said ICANN remained a "neutral evaluator" of applications and held no emotional opinion on specific names applied for under the program, such as .sucks.

The application process has attracted controversy, however. A glitch in the application system in April exposed a portion of the list to competing applicants and forced ICANN to take the system offline, extending the application deadline by several weeks.

However, Beckstrom said he did not know of "any specific linkage" between the glitch and the 154 applications made for refunds – amounting to $3.5 million – before the closure date.

ICANN has also come under fire recently for a proposal to use a "digital archery" system, which would see applicants required to effectively hit a switch as close to an assigned time as possible, in order to determine when their application would be processed.

ARI Registry Services chief executive Adrian Kinderis said he had appealed to ICANN to ditch the batch processing approach in favour of processing each application individually.

"For us it's all about just creating a level playing field," he told iTnews.

"I really don't believe that 1900 [applications] is a large number."